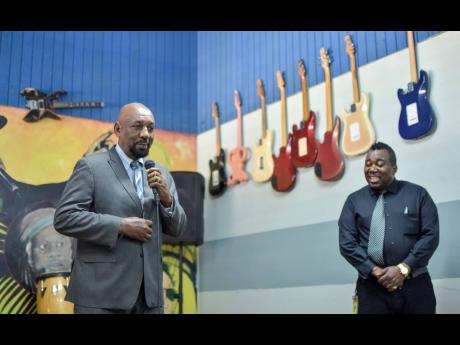 Contributed
Minister of State in the Ministry of National Security, Rudyard Spencer (left), speaking to the inmates. Looking on is Dexter Thompson, director of corporate communications and public relations at the Department of Correctional Services.

There is a perception, that life after incarceration is arduous – often paved with pathways leading back into the belly of stately restraint. To change that, particularly for the musically inclined inmates at both the Tower Street and St Catherine Adult Correctional Centres, they have resumed recording music.

Under the Rehabilitation of Offenders through Music Programme, the inmates have the expert support of music producer Mikey Bennett and programme director Gladstone Wright. Through their efforts, they aim to release two complete albums by the end of August.

During a recording and performance session held at the Tower Street facility on Wednesday afternoon, participants of the programme gathered in the music hall to showcase the work they have done thus far, with some inmates even taking to the stage, equipped with multiple guitars, bass guitars, a keyboard and drum set. Other inmates fiddled expertly with the music mixer and laptop; cueing music, adjusting volume, before taking the mic to perform their original songs. There was even a pop moment, with one inmate taking on OMI’s Cheerleader.

A number of the songs have already been recorded, the next step is mixing and mastering. Conceptualised by Wright, the programme began in 2004, producing the reggae hit Behind These Prison Walls by Jah Cure. “They continued the programme in terms of rehearsals and so on but no recording was taking place, until over a year ago,” Wright told The Gleaner. Despite the support from Bennett’s Grafton’s Studios and the CHASE Fund, the programme still struggles to find all the resources needed to sustain it over an extended period.

“Minister Pearnel Charles asked me if I would revamp the programme, and I agreed,” Wright noted. He was joined on Wednesday by minister of state in the Ministry of National Security, Rudyard Spencer; chief technical director in the Ministry of National Security, Shauna Trowers; commissioner of corrections, Lt Colonel (retired) Gary Rowe; Policy Director Ella Ghartey; and Alain Williams of the CASE Fund.

“The inmates continue to demonstrate an interest in the activity, and I hope and pray that we will have a number of Jah Cures coming out of this situation,” Spencer said.

He continued, “It is important for the total development of the inmates. Those really looking in this direction, they should be encouraged. What I want more than anything else is for those who have demonstrated the potential, are given the opportunity. The sky should be the limit.”

Bennett has long consulted with the programme, but began visiting with the incarcerated vocalists last year as they lay down the tracks for their upcoming albums.

“Now, we’re in the process of recording two albums. One is a collaboration with several artistes. It will comprise 16-18 songs performed by inmates and former inmates, and the other is with Cerano Walker (an inmate at St Catherine Correction facility),” Wright shared.

“We’re inviting a few international artistes to lend their voices on a few of the songs. Mutabaruka is going to join one of the individuals. He, so far, has agreed, and Agent Sasco has asked to hear the music before he takes a decision. I’m sure I’ll get another two or three.”