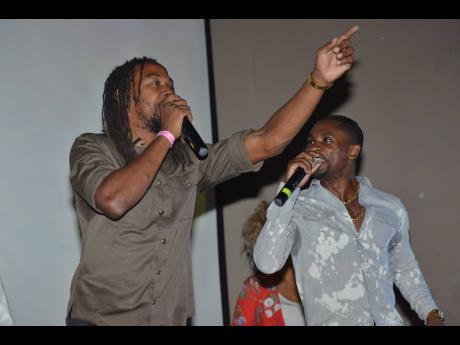 Similar to patriotic Jamaicans gathering before their television screens to watch Usain Bolt compete in any race, a packed crowd gathered at his eponymous Tracks & Records restaurant in Kingston on Thursday night to take part in his Olympe Rosé brand launch, which comprises a dancehall rhythm and deluxe champagne.

The music production was created by the sprint legend’s cousin, Rajah Nelson, and Bolt stands as its executive producer, with appearances from acts like retired footballer Ricardo ‘Bibi’ Gardner, Christopher Martin and Munga Honourable, who were in attendance.

The entertainers were the focus of every cell phone when they took the stage, as each performed their single on the sprightly, dancehall creation which boasts potential of being a favourite among music enthusiasts.

Bibi’s Mount A Gyal was noticeably the crowd favourite, as there were earshotting ‘blanks’ and shouts for an encore as he deejayed his sexually egotistic number, quite the comeback for the producer who has been off the music scene for a few years.

“I actually love the rhythm and I must say I’m impressed with Bibi ‘cause I really didn’t know he was that good,” patron Tiffany Taylor told The Gleaner. “Him can ride the rhythm, you can vibe with the song, dance to it and it’s very catchy so it’s a hit for me.”

Dianne Brown added, “I think the rhythm is fresh, it’s modern and it’s definitely gonna be a hit for the summer, you can dance to everything.”

Martin also received a resounding response for his contribution, Suh Wi Dweet, and described the production as more than seasonal.

“It has the potential to go year-round, ‘cause summer is too closed-in,” he said.

“The performance was just straight vibes. When you are doing something you love and you have a lot of supporters outside of the music, whether or not they know the song, from it hit them, it hit them. Any time I create I put my all in it, and from I love it I feel like the fans will love it, and that’s the mindset we had going into this project.”

Hilltop boss Munga shared it was like “a regular day on the corner” when penning his track, Weekend, and shared his expectations for the production.

“We all hope it’s going to make a big impact because Usain produced it. There’s a champagne surrounding it and it has five classic tracks so far on it,” he said.

“Usain has always been a music lover and supporter, if you know him you’ll know he was even a selector. Music is what we do every day and vibing in the studio was like regular day pon the corner for us.”

The man of the moment shared before the premiere that he was not anxious, and instead excited to hear the crowd’s response. When all was said and done, he was pleased, but is still not getting ahead of himself.

“The reaction here is different from the public’s, and that’s what I really want to see,” Bolt started. ... We don’t have a label as yet, people just know us as a group called A-Team. Maybe in time we will trademark it.”

The latter commended the retired track athlete for venturing in the music business.

“It’s fabulous and great thing for the music business,” he said. “Usain is a champion, reggae music and dancehall are championship stuff, so it’s real championship and positive energy and great marketing behind this whole thing.

“I’ve heard a few tracks, I like ‘em, it’s different, everything is up and bubbly.”