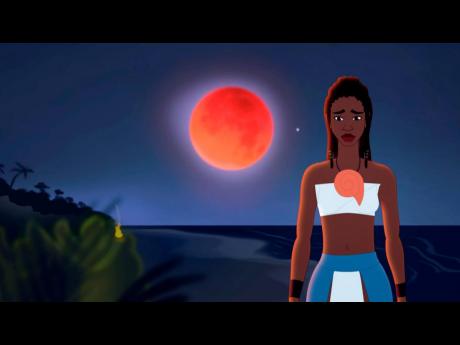 Ina Sotirova’s AGWE is moody and atmospheric, all transported to life with animation. Set on a Caribbean island inhabited by slaves who survived a shipwreck, AGWE is partly inspired by the director’s education in and interaction with African culture and spirituality. It focuses on one female priestess who must conquer her insecurities to lead her family out of danger.

“In addition to being written and directed by a woman, the focus is also aimed at the female experience, where emotions such as isolation, loss, and possible madness swirl into a dark and deadly face-off so that the character then has to realise her power,” Sotirova, an instructor in the Univesity of the West Indies (UWI) Community Film Project, explained.

It is one of two Jamaican animated films that were featured in the recent GATFFEST Film Festival. the other, Poddu Portals, directed by Andre Hall, focused more on the futuristic side of thinking. Notably, AGWE was a first for Sotirova, and the production won the Jamaican Film and Television Association Propella Script-to-Screen Programme 2018 and finished second place for Best Short and Storyboard at the KingstOOn Animation Festival 2019 in January.

The director revealed, “I did not discover that I wanted to do film until doing my master’s in journalism, where I ventured into making documentaries. My thoughts were always that I am good at getting across what already exists (what I can see), but I did not feel I had enough imagination to do a production that included moving graphics.

“Of course, AGWE would not have come to life without the animation created by the principal animator, Kevin Jackson. “ there is a lot that goes into doing an animation where nothing exists, where everything has to be created … . it was a very interesting experience.”

Sotirova said that it is a great time for film and the animation industry to converge, noting that the number of programmes directed at training aspiring animators and film-makers has climbed. She also anticipates the animation becoming a series in the medium term.

“The sector is growing as an alternative for creative employment of the youths, and credit must be given to organisations like the Jamaican Film and Television Association for the work they have done to develop the local talent,” she said.

The director’s affection for animation and confidence in its future has also, evolved somewhat. Animation, she explained, has many effects on a child’s development, and as much as parents do not like to admit it, a child’s interest in animated or cartoon characters can yield positive results.

“I think it is important for parents to support and hone their children’s passions – to help them develop them into something more than a hobby. Going back to things that our societies teach us that we should be doing this or that, what is considered ‘he right thing’, because of that, a lot of people don’t discover who they are,” she told The Sunday Gleaner.

“Even within ourselves, it is not unusual for us to kind of dismiss hunches while growing up and say that drawing ‘cartoony’ images is just a pastime, but what could be better than turning your hobby (that you love) to living?” she concluded.