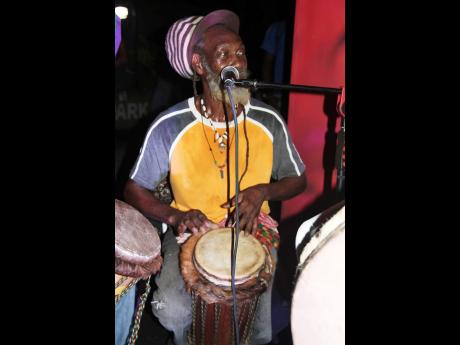 Stephanie Lyew
Caught up in the rhythm at the recent Itopia Life launch is King Tebah of the Rastafari Indigenous Village out of Montego Bay.

Itopia Life Herb House, the second medical cannabis dispensary to open in Kingston and the fourth in the entire island, has found its space at the home of Jamaica’s artsy Henzell family on West Kings House Road. the newly launched company will be part of a greater cultural experience, says Justine Henzell – daughter of late Jamaican film director Perry ( The Harder They Come) and Sally Henzell – writer-painter and owner of Jake’s Hotel at Treasure Beach.

“The property has always been a home for creatives ever since my parents moved there in 1965, and it is going to continue,” Henzell told The Sunday Gleaner.

“We have rented the top building to Itopia Life because we agree with the company’s mandate and recognise that they want to be more than a cannabis company. So it is going to be used to allow creatives to express themselves,” she continued.

A creative herself, Henzell hinted that her family intends to set up an exhibit of Jamaican films throughout the years and screen the films in the courtyard or ‘dub garden’ as it is more commonly called.

“Nowhere in Jamaica has had that emphasis on film. I grew up at 10A West Kings House Road, which was, basically, a movie production set.. Everything from pre- to post-production and filming happened at the back of the property, so it was natural I found my way into film too,” she said. “Every single meal and conversation was in the form of debate, so naturally, I see it as a home for creative expression and lively debate. we want to see it happen again.”

Speakers at the launch included Itopia Life’s CEO Blaine Dowdle from Canada; president of the company, Joan Webley; and Minister of State in the Ministry of Industry, Commerce, Agriculture and Fisheries Floyd Green. However, the most informative and entertaining words came from Sally Henzell, who shared not only her passion for the legalisation of marijuana, but her own moments “on a high”. Even though the skies indicated the possibility of rain, the Henzell matriarch maintained an unclouded atmosphere as she stimulated laughter with every word. Webley knew what she was saying when she said that Itopia Life would be relying on what the Henzells do with their entertainment initiatives.

The Itopia Life president said: “The Henzell family already has their legacy. the whole complex belongs to them, making them our landlords, but while we operate the dispensary and herb house, they will be building out a bigger cultural entertainment experience.”

In terms of linking entertainment and wellness, she added, “We plan on playing a role in holistic healing events with cannabis. It is super important that with our first flagship dispensary that we have somewhat created a renaissance for this cultural hub. The dub garden has always existed here, but through this injection with Itopia Life, it is going through a rebirth and in the months to come, it’s going to emerge as a new cultural space for Kingston.”

Henzell noted that Jamaica is known worldwide for its ganja and its connection to reggae and Rastafari. Whatever the given nomenclature – marijuana, ganja, weed, Mary Jane, or sensi – the plant has been a large part of the Jamaican culture and music. It’s no surprise that Itopia Life implemented Starbwoy, Half Way Tree, and Get Busy (titles of popular songs) in naming some of their marijuana strains.

The fully integrated seed-to-sale company, according to Minister Green, is making a major contribution, not only to the economy, but it is playing a role in the island’s contagious culture.

“Itopia Life is not only embarking on making significant contributions to brand Jamaica in this, our budding medicinal marijuana industry, but they see themselves as guardians and advocates of the culture and the role that ganja has played in shaping the Jamaican identity. It is safe to say that it acts as a cultural ambassador for Jamaica,” Green said.

The Itopia Life Herb House features a dispensary and two designated smoking lounges as no smoking is allowed on the complex, neither in the parking lot nor on the verandahs. Steaming and use of the chalice will be allowed during events on the company’s calendar, however, an exception was made for the launch, where persons could partake in the “puff-and-pass” experience with friends as they delighted in the sounds of drums and chants from Firstman, backed by King Tutto, Queen Bee, Ras Kamau, and King Tebah of the Rastafari Indigenous Village.