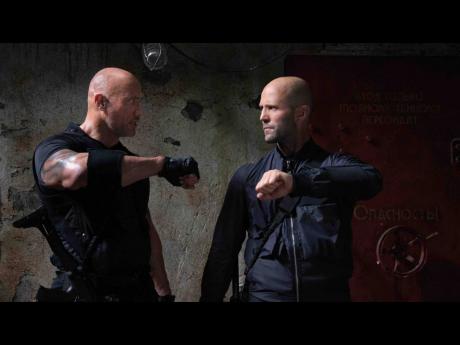 AP
Dwayne Johnson (left) and Jason Statham like you have never seen them before in ‘Fast and Furious presents: Hobbs & Shaw’.

It’s not uncommon for a huge franchise to break things down into a spin-off or two in its later years. Fast and Furious has been going strong for about the length of the Harry Potter saga, so it makes sense to try something new. In the span of those eight movies, Dwayne Johnson became a mega star, so it’s no surprise that he and the modern face of the Expendables Jason Statham, are the choices for the first in the Fast & Furious Presents series, Hobbs & Shaw.

What you see is what you get with this movie. Hobbs is a gargantuan beast of a man who never opts for a light tap when he can use a sledgehammer. Shaw is like a poor man’s James Bond, who likes to take his time but can break some bones if the need arises. They’re fundamentally different (as the movie will remind you at every turn), which must be ignored when they’re put together as the only team to save the world.

So they have differences, and the movie exploits those differences in various ways. Some clever, others not. The clever is when the movie shows you the methodology of the two heroes as diametrically opposed, letting it sink in without being obvious. The ‘not’, is when the movie takes the Hobbs approach, and beats you over the head with what a cantankerous pairing these two are, mostly through almost non-stop bickering.

If the dialogue were any good, there wouldn’t be much of a problem here. Instead, it seems to be in a contest with the action as to which is more ridiculous. Yes, the film has the same over-the-top action that’s become the norm for Fast & Furious, albeit much more creative and engaging this time around, thanks to director David Leitch of the John Wick films.

Overall, Hobbs & Shaw is like a rehabilitation programme for substance abuse. It works if you work with it. Thinking about it for too long and taking it apart will definitely leave it in shambles, but if you can go in for some high-level action with a low-brow script, you’ll be entertained.