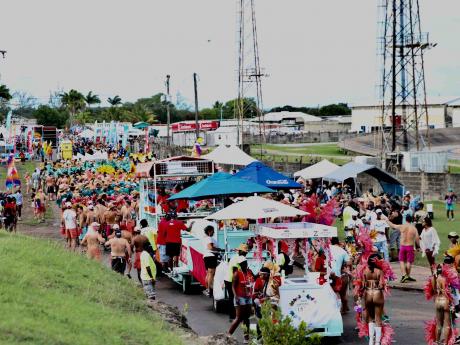 The hotbed of culture that is Barbados Crop Over, a period of not much sleep, is wide awake this morning for its finale– Grand Kadooment Day throughout the streets of Bridgetown.

The road march, which was scheduled to begin at approximately 9:00 a.m., is just about to commence as the start was delayed slightly by rain...the one thing William ‘Billy’ Grant, CEO of the Barbados Tourism Marketing Inc (BTMI) wished would not affect the festivities.

Grant told The Gleaner, “Nothing can prevent today from being great; it’s about 23 bands on the road and the weather permitting, it will be a day of grand celebration exposing our tourists to part of our culture and maybe some surprise guests.”

The fervour is in the air as music trucks have sounded their horns along with the season’s biggest tunes such as King Bubba’s She Always Bend Over and Mole’s Breathe signalling the revellers to get in line on Stadium Road.

The island has spent the past two months preparing for this day says Senator Rudy Grant, Chief Executive Office of the Barbados Hotel and Tourism Association (BHTA).

“Preparations start even before the physical aspect started, there is a lot of activities that has taken place and projects undertaken by the collaboration of BTMI and BTHA,” Grant told The Gleaner.

“The BTMI would have visited other islands in the Caribbean region and Latin America as well as the United States and United Kingdom to engage persons and educate them about Crop Over and encourage them in coming here,” he explained.

Looking at the crowd in the streets, and the uncountable number of flags flying high, there is diversity among the nations.

Grant said, “We continue to see growth, in terms of overall visitor arrivals coming out of our major markets between January and June especially with an increase in long stay arrivals of about five percent from our largest market which is the UK and there is significant growth in the US market as well. Occupancy has also increased about the same percentage.”

Noting the numbers, he says while they are impressive, the main concern for Grand Kadooment for the organisations is that it turns out to be an unforgettable time for those who participate as well as bystanders.

“I feel very positive that the outcome of today’s march will be something equally as impressive to celebrate,” he said.