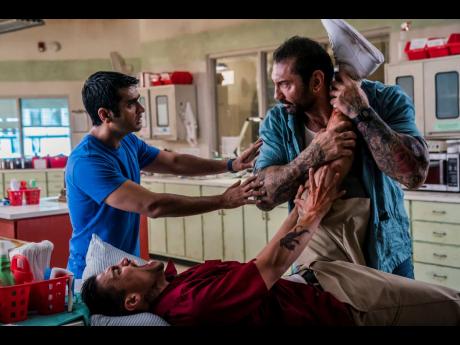 AP
This image released by 20th Century Fox shows Dave Bautista (right) and Kumail Nanjiani (standing at left) in a scene from ‘Stuber’.

Since the days of Alfred Hitchcock, film-makers have made great use of communal travel for the purpose of intriguing narrative. Taking two or more people from different walks of life and sticking them in a confined space is a tried-and-true formula for compelling stories. The ­characters will learn from each other throughout their journey and come out the other side better rounded people. One might say, it’s the perfect vehicle for character growth.

Pity that the characters in Stuber are so unlikeable, you’re not the least bit invested in that growth. The story is exceedingly simple, yet at the same time, too complicated for the ­characters themselves to comprehend. Dave Bautista’s Vic is a hardened detective who feels like a ­parody of cop heroes of the past. Except the movie isn’t playing him up for laughs. You’re meant to be on the side of an action hero who never does anything to win you over.

Vic is trying to solve the case of his long-time partner’s murder. The trouble is, Vic just had lasik surgery and is temporarily blind. Enter Stuart, the Uber driver, the titular ‘Stuber’, a pun the movie stops to directly acknowledge as if it’s God gift to comedy. Stuart is played by Kumail Nanjiani, who is once again playing a nebbish, frightened, and downright ­irritating chaperone for the hyper violent Vic.

It’s not that Stuber is ­completely unfunny. There are moments with real comedy that riffs off the ­differences of the two leads. There are one or two action scenes that were ­genuinely impressive and unique. That’s about it. The rest of Stuber is a slog to get through, and though it is under two hours long, it’s an unbearable ride.

This is not a ride you want to share.