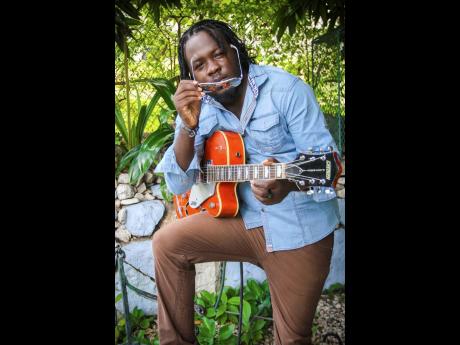 Being the guitarist for internationally acclaimed reggae singer Jimmy Cliff definitely has its perks – you get to travel the world, perform for royalty, and network with international artistes. However, for Locksley, the inspiration to revamp his own music career was the biggest blessing he received working with the Reggae Night singer.

The musician parted ways with Cliff in 2017 to focus on his own career. He recently released Fren Killa, a one-drop single produced by his Hillside Music label.

“I write about my experiences, and this song was in my spirit from 2008,” he told The Gleaner. “A good friend of mine went missing and when dem find him body, his head was cut off. After doing my research, I realised it wasn’t a stranger who killed him, it was someone he knew. Later on, another friend of mine was killed by someone he knew, and I felt moved to finally do the song.” Fren Killa follows Play My Music, inspired by another real-life event. While hosting his birthday dinner in 2017, he said police showed up to put an end to the night’s festivities after neighbours made a noise complaint.

Locksley, who first attempted a recording career in 2005, said the response to his music has been more encouraging this time around.

With roots in Tower Hill, St Andrew, Locksley, whose given name is Locksley Dixon, started playing the guitar at eight years old, and moved on to the keyboard with the guidance of his brother. Raised in a Christian household, he played for the church choir and later enrolled at the Edna Manley College of the Visual and Performing Arts.

His debut album, Grooving, was a gospel effort, and Locksley recalled walking from Papine to Half-Way Tree trying to sell CDs. On his journey, he encountered an affiliate of I-Wayne, who offered him more than he set out for that day.

“He heard a song from the album and told me to come to his office, and the following week he had me go for a visa to tour with I-Wayne.”

The gig fell through, leaving Locksley disappointed, but he eventually received the chance to be part of Tony Rebel’s band, where he remained for three years.

Despite his steady rise as an esteemed musician, something was still missing for Locksley. He had a long-standing desire to work with Cliff, ever since his father made him watch The Harder They Come, the movie which stars the singer.

“I met Cliff’s engineer, who told me to come to an audition. I thought, ‘Am I dreaming?’ I couldn’t believe, ‘cause from a young age I wanted to play for him ‘cause I love his style of music,” he said. “When I went to the audition, there were about 10 or 15 guitar players there, some I saw on TV, and I told myself mi nah get through. I think what caught him (Cliff) was I didn’t have any guitar effects or nothing to enhance the sound, it was just the raw guitar. When I started playing, I saw him hold up his head and smile, then he got up and started dance. I played about three songs then he stopped me, and I later found out I got the job.”

Touring with Cliff, Locksley said he learned even more about the music business, and how to curate songs of impact and longevity. Now, taking the solo route, Locksley hopes to build a legacy as revered as those of Cliff, Peter Tosh, Bob Marley and Jacob Miller.

“I’m gonna be one of the names that people remember. I am not a rebel, but I’m not afraid to express what I feel in my music,” he said. “I’m coming from the church and a family who grew me well, so if I’m gonna sing something and my mom can’t listen to it, I’m not doing the right thing. Everywhere I go, people say they want more of my music and they love the vibe; they say I have that sound like Peter Tosh and Bob Marley. It’s all about greatness and making music that makes sense, so I know I will make it.”