Vintage Voices | Miss Lou - From Excelsior to the world 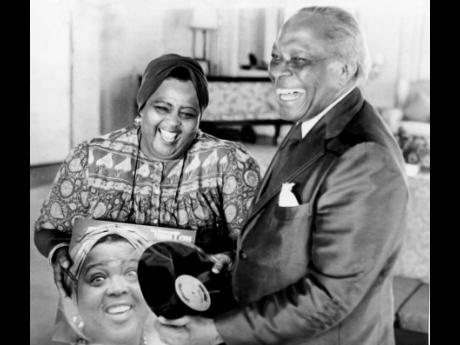 Gleaner photograph
1981: Governor General, Florizel Glasspole (right), shares a happy moment with Louise Bennett-Coverley, as she presents him with a copy of her album “Boonoonous” at Kings House. The album featured a number of Jamaican folk songs. 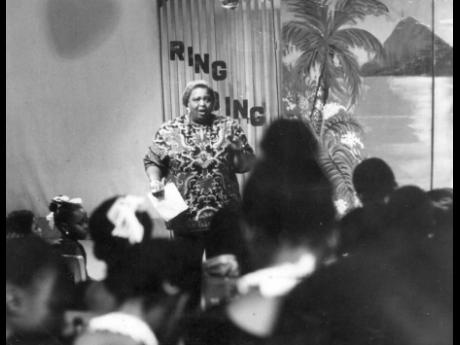 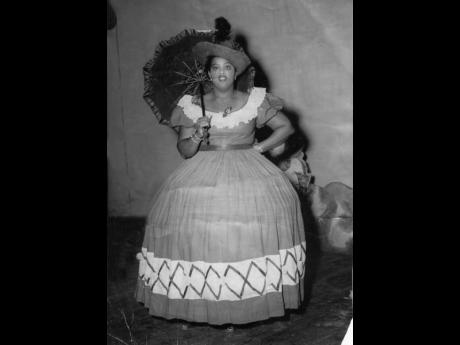 The Gleaner
A young Louise Bennett.
1
2
3

Excelsior High School, situated along Mountain View Avenue in St Andrew, stands tall as the alma mater of iconic Jamaican folklorist, actress and author, the Honourable Louise Bennett-Coverley. It was at that institution, in 1939, that Louise Bennett, popularly known as ‘Miss Lou’, got her first big break that took her into the world of theatre. She was almost out of her teens when she performed at a prize-giving concert at the school that year. Her performance created quite, a stir, and for her efforts, she received a book as her prize.

In the audience was one Eric Coverley, a man who was a seasoned campaigner and talent scout in the theatre world. He had traversed the revered areas of show promotions and acting and was best remembered by those who were around at the time for his role in the 1955 adventure thriller Man Fish. Coverley happened to be the guest of the evening at the concert, and Bennett seized the opportunity to have her book autographed by the dignitary. The words ‘very unusual and outstanding talent’, accompanying the autograph, remained indelibly etched in her memory, even as she went on a drama course abroad in the early 1940s.

On her return, she was greeted with an invitation from Coverley to appear on one of his Christmas morning concerts at the Ward Theatre. No doubt, Coverley was overly impressed with her performance at Excelsior High and wanted to cash in on the young lady’s talent. Her first payday earned for her one guinea (one pound and one shilling). On another occasion, Bennett related a dramatic scene in which she adamantly requested more for her services. It had Coverley submissively responding with, “Remember Louise, is me.”

A star is born

With every succeeding performance, the relationship grew stronger, while Bennett grew in stature as a theatrical star. Eric Coverley recounted, in dramatic fashion, the build-up: “We used to get lots of invitations, and people would always say to me, ‘Bring Louise Bennett with you when you’re coming’, and she would get invitations asking her to ‘bring that boy Coverley to perform with you’. So I had to escort her home every time, whether it was a dinner or a show, and deliver her at her door and then run back to catch the same subway. And then another night, I took her home, and I said, ‘Look Louise, I can’t stop a minute. It seems that I might just have to marry you.’ And she turned around and said to me, ‘Coverley, is that the way you propose? That could never be a proposal’.”

Whether it was a proposal or not, the stark reality is that they got married shortly after, in 1954, after 17 years of friendship. And that friendship became the main cornerstone of Louise Bennett-Coverley’s illustrious career, which included acting roles in movies and the National Pantomime, authoring books, doing musical compositions, and hosting television and radio shows at home and abroad.

Her popular children’s programme, Ring Ding, at the Jamaica Broadcasting Corporation, was a must-listen for children between 1968 and 1980, while The Lou and Ranny Show had the older folks on the edge of their seats each week. But there was hardly anything that could compare to her social commentaries, Miss Lou’s Views, contained in a series of presentations for radio during the 1970s. Considered some of her rarest pieces they, almost invariably, criticised the status quo for several shortcomings. In one piece, entitled Water Shortage, she satirically and ambiguously chided successive governments for their shortsightedness in not properly harnessing the Corporate Area’s water supply, as she asked:

“Is wha happen to di dam dem what we got inna Jamaica, eh sah? My Auntie Roachie nearly get pus tisik last week after all the rain-falling, road-flooding, and river-comedungings, fe hear newspaper sey ‘the water in the dam had not risen or improved’. Cooyah! Auntie Roachie sey that dem dam de a defamate rain character and a gi rain bad name and a gwan to the public like rain a keep malice with dam. I think the dam mussa have a leak.”

Considered Jamaica’s most cherished national treasure, Miss Lou championed Jamaica’s dialect and culture in the face of much criticism. Her pioneering work gradually led to the acceptance of the Jamaican dialect as a legitimate language, a far cry from the days when it was looked upon as degrading loose talk, careless speech, and a sign of low breeding.

On this, the 100th anniversary of her birth, a plethora of events has been planned across the island over 100 days from September 1 to December 10 to commemorate the centenary of the mother of Jamaican culture and theatre.

Minister of Culture, Gender, Entertainment and Sport Olivia Grange, under whose portfolio the celebrations fall, says: “Miss Lou devoted her life to restore and redeem the language of the mass of the people amid great criticism. She almost singlehandedly brought confidence and respect to the Jamaican Language.”

The celebrations organised by The National Library of Jamaica, the Jamaica Cultural Development Commission and the Bureau of Gender Affairs. Among the events planned is the renaming of the Gordon Town Square to Miss Lou Square; the National Library’s 100 days of celebration, with its ‘Miss Lou Travelling exhibition’ to be showcased across The Jamaica Library Service network; Miss Lou Culture Day at the Louise Bennett-Coverley Primary School in Gordon Town on December 6, and an islandwide Miss Lou celebration in schools on December 10. Several celebratory events are also to be held in Canada where she spent her last days until her passing on July 26, 2006.