A cosy Jazz ‘n’ Cabaret in the Pegasus ballroom 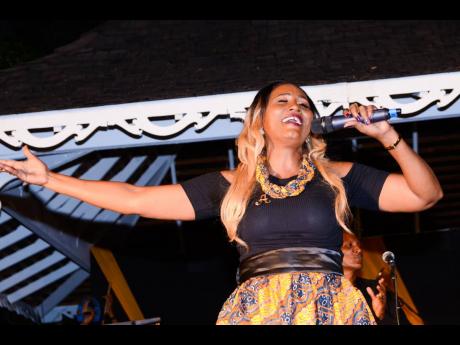 An incredible young talent with a stupendous set of pipes, the quintessential ‘one man woman’, a sultry singer with music in her DNA, and a band with decades of showmanship under its belt, all converged inside the ballroom of The Jamaica Pegasus hotel on Sunday evening to provide patrons with the promised ‘feast of the senses’.

It was the staging of the rescheduled Jazz ‘n’ Cabaret in the Gardens, which, owing to the weather, found its way within the four walls; and although the garden ambiance was missed, the performers made sure that they were on point.

Opening act and backing band for the evening, Fab 5, made the point that “jazz is a dying genre” and noted that at many jazz events locally, “there is actually more reggae and dancehall than jazz”. Among Fab 5’s selections were Wear You To The Ball and the Black Eyed Peas anthem, I Gotta Feeling, which had the predominantly mature audience on their feet.

Songstress Gem Myers, dazzling in her neon-green gown, emanated a Diana Ross aura, so it was unsurprising when she revealed that as a child she was a Supremes fan. But Gem was not there to reminisce – although she did take time to call out today’s uncouth generation and compare this era to the one in which she grew up – she was in the ballroom to sing. And sing she did. “Let’s pretend that it is 3,000 people inside here tonight,” she said, as she launched into a series of show-stopping songs, which had a male patron shouting in appreciation, “Big people ting!” Choosing carefully, Gem satisfied the senses with Deniece Williams’ Silly (Love Stop Making A Fool of Me), Do You Know Where You’re Going To (Diana Ross); Conversations (Cilla Black) and Reach Out And Touch, in which she exhorted patrons to do just that. She led by example and got rather cosy with a gentleman in the audience as she sang her speech about making the world a better place, if you can.

She made her exit to shouts of encore, and, consummate performer that she is, Gem obliged. Of course, patrons were yearning for her “big chune”, One Man Woman, which she delivered ‘party styleee’, and which forced emcee François St Juste to comment, “What a nice idea.”

Speaking to The Gleaner after her performance, Gem said that as long as patrons were satisfied, she was happy. She revealed that she is working on an EP with Stage Records, which is led by Grub Cooper of Fab 5 band.

Prior to Gem Myers making the Jazz ‘n’ Cabaret stage her own, the young man who St Juste described as “stupendous” thrilled the audience. Going by the name Andre Shepherd, he paid tribute to late, legendary Canadian tenor Leonard Cohen, with a masterful rendition of Cohen’s signature ballad, Hallelujah. Shepherd easily led his willing flock with songs such as Everything I Own, Come Over, an original which found much favour, and Cruisin, the Smokey Robinson Motown-era classic, which he introduced with the promise to “take you back to my time”. Of course, the vocal attendee sitting up front couldn’t let the freshman get away with that. “When was that? Yesterday?” he asked cheekily. Shepherd then melted every woman’s heart when he shouted out his fiancée in the audience, thanked her for giving him “balance” and dedicated Donny Hatahaway’s, S ong For You to her.

Singer Althea Hewitt, who took the stage after Gem Myers, opened her set with a tribute to Miss Lou, Evening Time. Hewitt, with her mega-long braids and mega-short dress, upped the sexiness ante and made her presence felt as she waded through the audience, getting up close and personal. She did songs from her recently released Stronger album and a foot-stomping medley which included Feel Like Jumpin’, 54/46 , and Lady G’s dancehall-inspired Nuff Respect.

Event organiser Youlanda Nunes told The Gleaner that she was satisfied with the “lovely turnout”, and noted that the event was not held the previous week, as originally advertised, because the ballroom space was unavailable. “This isn’t the first time that Jazz In The Gardens has had to relocate to the ballroom,” Nunes stated. She added that she was thrilled that the entertainers “gave their best”.