Sabree walks away from secular world 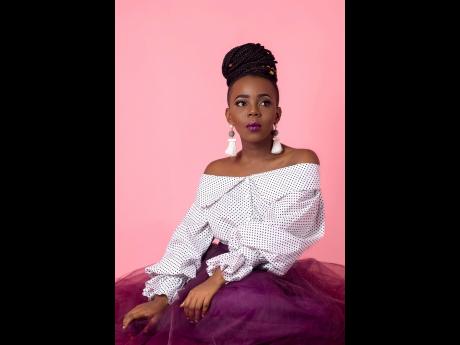 The night before singer Sabree released her debut gospel song, Amazing God, in May, she was restless. The track signalled her transition from the secular world, and doubts flooded her mind as she wondered what others would think, and questioned God’s will for her life. Then she remembered a vision she had months prior.

“God showed me myself on two stages, both with huge audiences. On one stage I was singing secular stuff, and it was a good time and people looked at me in awe,” the 28-year-old told The Gleaner. “On the other stage, I was singing music for God and the people in the audience were worshipping and crying, and I felt this tremendous amount of peace. God said either path will lead me to success, and asked which will I choose. I chose Him because that brought me peace, and I want to use the gift He gave me to bring people closer to Him.”

The single, co-produced with Kawain Williamson, was released the following day and continues to supersede Sabree’s expectations.

“To this day, I get testimonies from so many people who say the song has them in tears, and I want to continue to do what God is saying and release the music He has given me, and I look forward to seeing how it touches people,” she said. “I still get doubtful sometimes, but God reminds me that, ‘girl, I am in control, just easy yourself’.”

Christened Sabrina Nembhard, the St Andrew resident realised from a tender age that she wanted to be a singer and joined the school choir at Mannings Hill Primary and Oberlin High schools. Church also played an integral role in her musical development, but Sabree being a gospel singer was never her dream. Her talent earned her a scholarship opportunity to the Edna Manley College of the Visual and Performing Arts, but she declined.

“I turned it down because there were people saying music is not necessarily a career, you need to do something serious, so I went to the University of Technology, where I did hospitality and tourism management for one year,” she shared. “I realised that is not where I am supposed to be and told my mom, and she said I could have told her before because she would have supported me. I think the time passed for me to start Edna, so I worked at Digicel for two years and subsequently started Edna.”

Her debut release, Be Sure, in 2016, introduced her as a fusion singer and was followed by other singles centred on love, like Cherish the Time and Betta. But something felt missing.

“I felt numb and kinda went in a state of depression, because some of the songs I used to write were from a place of hurt and I couldn’t connect to them anymore. I guess I had gotten over the hurt,” she said.

She took a three-month break and prayed ceaselessly, and said God revealed her purpose through Christian lyrics.

“I can’t say I never felt God pulling me in that direction, but I guess I was just stubborn and following my will. Last year, I kept saying, God please don’t let me die without fulfilling my purpose. When I reached a place where God had me in the corner, I gave in and said, have your way.”

She hopes to release her next single, Rescued Me, next month.