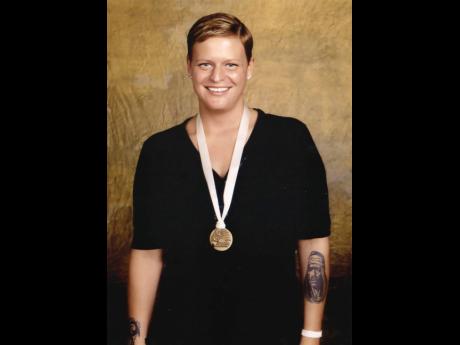 The name Cristy Barber carries a lot of weight in the music industry, and this isn’t surprising, given her wealth of experience and her award-winning exploits. A Grammy-nominated producer for her contributions to Island/Def Jam Records’ 2003 hip-hop/dancehall compilation Red Star Sounds Presents Def Jamaica, Barber could very well be considered a sort of label version of a video vixen.

“I have worked with almost every major record label,” she told The Sunday Gleaner with a laugh as she ticked off the record giants that have benefited from her services – VP Records, Columbia Records, Capitol, Island Jamaica, Elektra, Tuff Gong/Ghetto Youths, and an African label, Chibase Productions. And, by extension, she has also worked with numerous reggae and dancehall artistes, starting with Super Cat, the artiste she credits for opening up her appetite for the genres.

Born and raised in Michigan, Barber moved to New York City in 1992 and got her toe in the music industry as a freelance journalist. She happened to interview an influential dancehall reggae artiste named Super Cat, who was then signed to Columbia Records, and he lit a fire that burned out her hip-hop affiliations and blazed a reggae trail.

“I was just amazed by reggae’s history and his concept of it. I started writing about reggae and Word Up! magazine hired me as their reggae writer,” she recalled. That was over 25 years ago, and, since then, she has focused on breaking Jamaican acts in America, taking one culture to another.

Barber’s first full-time industry job saw her being director of operations for rapper KRS One’s Front-Page Entertainment, but, by 1995, and with the blessings of KRS One, she moved over to Capitol, handling publicity and promotions for Jamaican dancehall deejay Spragga Benz. She was at the forefront of Spragga’s critically acclaimed album, Uncommonly Smooth, and made many trips to Jamaica, and further established herself with the main players in the industry.

It was the period in Jamaica’s music when the majors were signing a plethora of reggae and dancehall acts with the intention of pushing them mainstream. Super Cat, Diana King, Ini Kamoze, and Mad Cobra were all signed to Columbia, and the need arose for a promotions person. So, while at Capitol, her dream job of working at Columbia came to life and, curiously, Barber worked at both labels simultaneously for a period.

Cristy Barber’s track record has seen her playing a role in some defining moments in reggae and dancehall. Her work with Chris Blackwell’s Island Jamaica imprint as director of marketing and promotions included focusing on the soundtrack to the film Dancehall Queen, the highest-grossing movie in Jamaica at the time. The soundtrack’s title song, by Beenie Man and Chevelle Franklyn, was one of the biggest dancehall singles of 1997.

Although not afflicted with wanderlust, Barber moved over to Elektra Records in 1998. “I got the opportunity to handle the publicity, marketing, and promotions for Sly & Robbie’s Grammy award-winning album Friends, but I also did some independent projects, including marketing Buju’s 1998 VP album, Inna Heights,” she said.

It was perhaps the great job that she did on the Buju project that led VP executives Chris and Randy Chin to offer Barber a position as the director of their A&R department, and that, she says, was the start of “an extremely fruitful period for the label”. With a goal to gain traction for reggae and dancehall within mainstream markets, she signed dancehall act Buccaneer and worked on a groundbreaking album, Da Opera, fusing dancehall with different genres including opera and Southern California punk rock. Her successful promotional work on Beenie Man’s single Who Am I? took him into the US mainstream and paved the way for other dancehall acts.

Barber made her departure from VP, only to return years later as vice-president of marketing and promotions. She worked on albums by Beres Hammond, T.O.K. and Busy Signal. What she terms one of her greatest accomplishments at VP was “uniting my love of country music with my passion for reggae on the groundbreaking album Reggae’s Gone Country.” A joint release between VP and Warner Nashville, the album was co-produced by Dean Fraser and country music superstar John Rich and featured reggae renditions of 13 country classics by top Jamaican vocalists. Reggae’s Gone Country made history as the first reggae album to reach Billboard’s Country Album chart.

Barber, who is now handling the careers of Alcai Harley and Spragga Benz, whose first album in 10 years, Chiliagon, recently made its debut at number one on the Billboard Reggae Album chart, attributes her decades of success to an abiding love of music and commitment to the artistes she has developed and promoted. “I have some of my artistes tattooed on my skin,” she told The Sunday Gleaner with pride. If she has any pet peeves, it is the need for more of the artistes outside of Jamaica who use reggae music to build their careers to show respect for the genre. She also has a desire to see players in the music business seek knowledge about the things that matter. Barber recalled that in 2003, when she first sat on the Reggae Grammy Screening committee, which she served as co-chairman for 12 years, there was only one registered voter out of Jamaica. “I started a campaign 16 years ago to get artistes, producers, and all the eligible players in the industry to sign up and let their voices be heard,” she said.

Barber emphasises that she has a mission to ensure that Jamaica and Jamaicans benefit from her being in key positions at all the labels she has worked with. “When I worked with the majors, I made sure to spend some of the money in Jamaica. The vibe that comes from Jamaica is intriguing. I feel so embraced so I owe it to give back,” she said.