‘Once a Man’ – a classy production 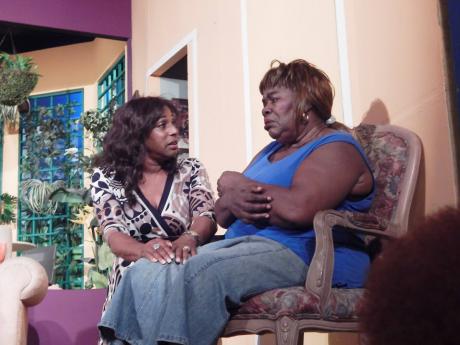 Michael Reckord
Abigail (Karen Harriott, left), having a solemn conversation with her helper, Miss Enid (Dorothy Cunningham) in a scene from ‘Once a Man Twice a Wife.’ 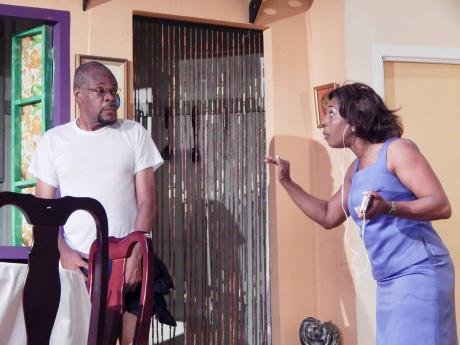 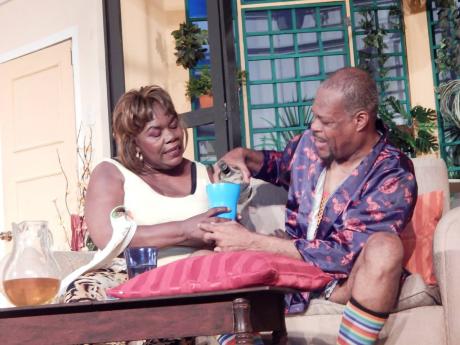 Prout should know what he’s talking about. With the current play, Once a Man Twice a Wife, now running at the Little Little Theatre, he has premiered the 11th play by Dawkins who, among other unconventional characters, gave us a female God (in Feminine Justice).

Prout’s comment came when, after Saturday’s matinee show, I asked the director how he and his actors dealt with the three complex characters in the play. Though all are seriously flawed, they end up being sympathetic.

It was, in fact, “fun” exploring the characters, Prout said, especially in light of the cast’s talent and extensive stage experience. For the three actors – Dorothy Cunningham, Karen Harriott and Earle Brown – that cumulative experience stretches over more than a hundred years. To that may be added Prout’s own 40 years as a theatre practitioner.

Fundamentally, the play is about unconditional love. No doubt to get the audiences to feel empathy with the characters, Prout, in the printed programme’s director’s message, asks the readers whether, among other things, they have ever received or given unconditional love.

The play touches on other topics, too. One of them is social status, and the question about the wisdom of marrying below/above one’s class is asked. Another issue is types of work – because Byron works in a smelly sewage plant. Though he earns good money, enough to buy a lovely middle-class house, to his wife’s disgust, he comes home smelling of the sewer.

He also speaks patois, but ironically, the standard English-speaking, disdainful Abigail would be a patois speaker herself had Byron not taken her off the streets and paid for her university education.

The plot, which has as many twists as a corkscrew, revolves around the efforts of the two women in Byron’s life to achieve the relationship with him that they want. This is not the relationship that he wants with them, at least not initially – which is where the story’s conflict arises.

In the early scenes, the women come across as extremely unpleasant. Byron is the ‘good guy’, albeit something of a floor mat. As the play proceeds, though, we get greater understanding of the characters and our feelings change.

Explaining his creation of the characters, Dawkins recalled an early conversation with my late uncle Lloyd Reckord, who directed several of Dawkins’ early plays. He cautioned Dawkins never to let his head have too much influence over his heart, and to be emotionally true to his characters.

Dawkins said he has followed the advice, trusting that his characters can resonate with audiences because of their own life experiences. Judging from the patrons’ response on Saturday night, that connection was felt.

The set, efficiently and tastefully designed by multi-award-winning designer Trevor Nairne, is one of the many production components combining to make a truly classy production. Other award-winning theatre practitioners involved with the show are Quindel Ferguson (who handled the many costumes) and Dorraine Reid (light and sound).

Dawkins, who used to produce his own show, must be glad that he has handed production over to his daughter, Toni-Kay. She’s as meticulous a producer as she was a director of previous plays by her dad.