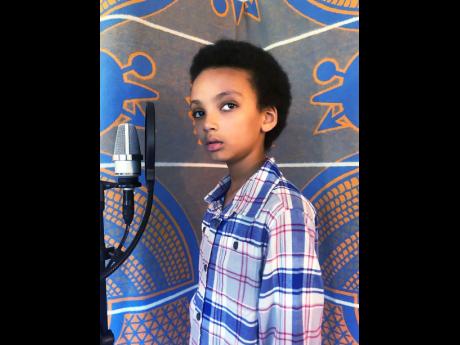 Seems So Strange was produced by Adrian ‘Donsome’ Hanson for Donsome Records.

Kailash explained why he decided to take on such a serious issue.

“When George Floyd was killed, it really affected me. I have read about injustice in several books, including those about Ghandi, Martin Luther King, Jr, and Louis Armstrong, among others. However, to see something like that happen in real life and to realise that it keeps happening all the time, that really shocked me, and it made me feel sad and angry. I know I’m only a kid, but I wanted to do something about it. I decided to use my voice and make a song about it. If I’ve learned anything, it’s how powerful music can be,” Kailash explained.

Seems So Strange is the first single from Donsome Records’ Black Tears rhythm. Scheduled for release next month, the project features songs from a number of established acts including Anthony B, Glen Washington, Lutan Fyah, Chezidek, Tommy B, and Marcia Griffiths, among others.

Kailash is somewhat of a child prodigy. He started out singing cover versions of reggae songs and posting them on social media. Some of the songs that he has covered include Bob Marley’s Forever Loving Jah, Natty Dread, and Positive Vibration; Meditation by the late Vaughn Benjamin; Skylarking by Horace Andy; King in My Empire by Cornell Campbell; and Skankin Sweet by Chronixx.

The youngster explained why he decided to perform covers of reggae songs.

“For as long as I can remember, Jamaican music has been the soundtrack of my life. My family listens to music every night, and a lot of the time, it’s reggae music. My dad knows a ton about music. He always knows the backstory about the artistes and how the songs came about. He talks about what was happening socially and politically at the time. Hearing those stories makes the music come alive, and it makes me feel closer to the artistes. Last year, when I turned eight, my dad and I decided to make our own cover songs of the music we love so much,” said Kailash.