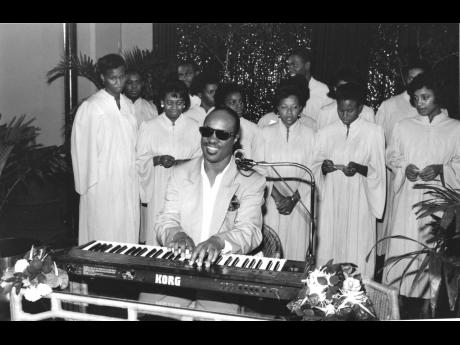 Contributed
Playing the keyboard, Stevie Wonder performs with a Jamaican choir during the 1990 Motown Soul by The Sea. His performance, although listed as an event surprise was deliberately not advertised. 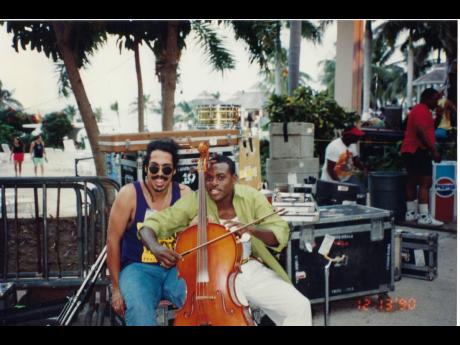 Exactly 30 years ago, a galaxy of cutting-edge R&B, hip-hop and reggae artistes poured into Montego Bay for an explosive, made-for-television concert that took place at the then Wyndham Rose Hall Beach Hotel (now Hilton Rose Hall) in the St James capital.

The event was called Motown Soul by The Sea and it took place just before Christmas, on December 13 and 14, 1990. It was primarily a lavish performance platform for the greatest black label of all time that was celebrating its 30th anniversary. Motown was enjoying a strong roster of new talent who were producing hit records. There was a resurgence of Motown hits on the charts, and the label was also the beneficiary of an infusion of cash, thanks to a new partnership with Boston Ventures, an investment company that was looking to entertainment for huge profits. So the then president of Motown, Jheryl Busby, his artistes, label executives and international licensees flew off to Jamaica to celebrate in song, some arriving by private jets. And Pepsi was there too, underwriting the cost of this huge promotion that was to be televised in the United States by Black Entertainment Television (BET), and in the United Kingdom through BBC. Global partners negotiated broadcast rights for Europe, Asia and other music markets.

The Motown Soul By The Sea experiment had actually started a year earlier with a private concert at the Tryall Resort in Hanover that featured established Motown A-list talent including Stevie Wonder, The Temptations, Smokey Robinson, Stacey Lattisaw, The Pointer Sisters and others. About that time the music landscape was changing rapidly and US labels were embracing a new generation of artistes that reflected a growing consumer interest in hip-hop, dancehall, the new jack swing and dance music. So the 1990 Rose Hall line-up reflected that trend. On the bill were Boyz 11 Men for their first major performance ever; Johnny Gill, who was enjoying chart-topping success with a number of smash singles including My My My, was booked too; as were Milira, The Boys, Today, MC Trouble, Basic Black, Gerald Alston and Blaze.

The Motown music magicians were joined by Stitchie, a recent Atlantic Records signee, Third World, Heavy D & the Boyz, Ziggy Marley and Lady Levi from the UK. This event was open to the public and a limited number of tickets for the two-day event were available for J$500 each.

Since the event was primarily a television recording, the start time was early, at 3 p.m., so as to take advantage of the stunning backdrop of the azure Caribbean Sea. The performances were nearly all spectacular, and the modest sized crowd loved both the local acts as well as the visiting artistes and their bands. Looking back, Boyz 11 Men was a standout in their loud, tropical colours, their flashy choreographed dance moves and their studio perfect harmonies. The success that they were to enjoy for several years to come and the millions of records sold made the Motown investment more than worth it. Stitchie brought the dancehall sizzle of Wear You Size, Natty Dread and Night & Day to the stage and Third World served up a compilation of reggae anthems, creating pandemonium with Now That We Found Love.

As it happened, many music fans missed the most mind-blowing performance of them all — R & B/pop legend Stevie Wonder belting out a catalogue of treasured memories, culminating with his partnering with a local church choir for a rendition of his then new single, For Your Love. Not many choirs get to sing with Stevie Wonder playing the keyboard. And Wonder doesn’t get to sing with a Jamaican choir every day. So it was extraordinarily magical moment for Wonder, the choir and the attendees. This performance, although listed as an event surprise, was deliberately not advertised.

Later that night, after Wonder’s performance, I was asked by Motown to drive Wonder to the Sangster International Airport to catch his private jet back to California. Owing to the pouring rain in Montego Bay, the flight was delayed by a few hours. It was after midnight and the airport was mostly closed so Wonder decided to just wait out the delay in the JTB’s Mazda 929 special edition sedan by the airport’s kerbside. This provided an opportunity for a lengthy, unhurried conversation with the icon and chart prodigy. It was not the first time Wonder had visited Jamaica and he maintained, over the years, a profound interest in the country, its politics and its culture.

Before setting off to the airport, Wonder’s first words were, “Mr Dave, we ain’t moving an inch from here until all the seat belts are securely fastened”. I quickly figured out his comment. He was in a horrible car crash in 1973 that left him in a coma for four days, so he is naturally obsessive about seat belts, which weren’t as common place in Jamaica then as they are now. His brother, who was also his manager, was there too, so we fastened all the belts and set off. Wonder is as great a talker as he is a singer, so he wasted no time to engage in conversation. His first question was from politics. He was sympathetic to the ideals of Michael Manley and he wanted to know how the new Manley administration was doing. He then talked about everything from the hot new interest in dancehall music among US major labels, to weather and the unusual December night rains to culture and dance theatre, to the aspirations of the Jamaican people.

He was somewhat surprised that the CD I was playing in the car was the Motown Christmas album that featured his recurrent hits One Little Christmas Tree and Someday at Christmas, alongside holiday cuts from The Temptations and Michael Jackson. I followed up with a production of my own, Stitchie’s first album on Atlantic Records, The Governor, that I had executively produced.

We chatted some more about music. Wonder was jolted from the serenity of the Jamaican Christmas breeze when I told him I heard on FAME FM the previous day that R&B crooner Ronnie Dyson had passed away. Dyson, whose catalogue of hits include One Man Band, Just Don’t Want to Be Lonely and I Think I’ll Tell Her was a close friend of Wonder’s for many years. There were a few moments of silence while Wonder processed the tremendous loss, and he resumed the conversation with personal reflections of Ronnie Dyson. The conversation left me confirming something I’d suspected: that Stevie Wonder has a big human heart filled with warmth and a genuine love, care and concern for his fellow man. He’s not sighted, but he has an uncanny vision that picks up all kinds of vibrations on strangers from a mere handshake, and with it, an informal reading of the pulse. Wonder has a long and glittering history with Motown as he was signed by Berry Gordy Jr when he was just 12 years old.

Rain still pelting, Wonder’s private jet finally arrived. He boarded with the assistance of his brother, and his departure marked the close of a most memorable Motown Christmas in Montego Bay. Two consecutive years of Motown’s Soul By The Sea in Jamaica helped to establish the destination as the music capital of the Caribbean. It also quickly turned the island into the premier vacation spot for record label executives, some buying land and beachfront property here. And more important, it opened the door to a wave of exciting and productive travel generating events that were to steadily flow into the island throughout the 1990s, and beyond.