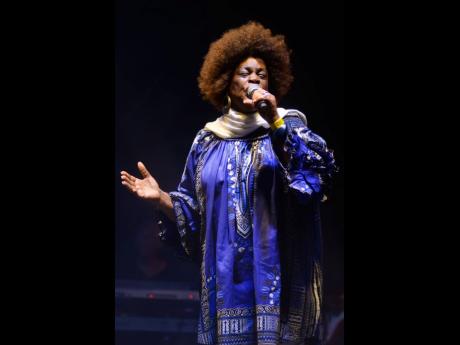 File
I-Three member Judy Mowatt has quietly blasted the use of ‘Three Little Birds’ by a Trump mob as ‘inappropriate’. 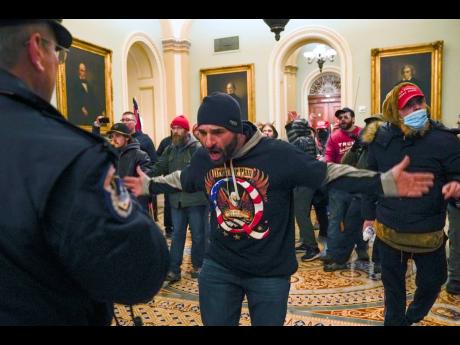 AP
Trump supporters gesture to US Capitol Police in the hallway outside of the Senate chamber after breaching the halls of the Capitol in Washington on Wednesday. 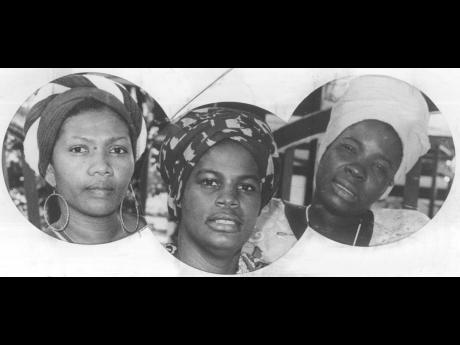 The Gleaner Archives
The I-Three (from left), Marcia Griffiths, Judy Mowatt and Rita Marley. Mowatt says they were often told that the song 'Three Little Birds' was written for the three members of the group.
1
2
3

Three Little Birds, a song by Bob Marley and the Wailers, was the music of choice for supporters of United States President Donald Trump, who caused carnage when they descended on Capitol Hill on Wednesday, and I-Three member, Judy Mowatt, has quietly blasted it as an inappropriate use of the song.

“There is a song for every human situation, and people will use a song for their own intentions. But this was a wrong interpretation. Three Little Birds has nothing to do with protest, war, or uprising. What we are seeing now is defeating the purpose for which the song was written. Three Little Birds is about peace, calm, and encouragement,” Mowatt, who toured for years as part of Marley’s vocal backing trio, told The Sunday Gleaner.

It was on Wednesday evening that USA Today Congress reporter Christal Haye tweeted, along with a video of the rioters: “As we hit curfew in DC, this is the scene outside the US Capitol. Trump protesters are singing, “every little thing is gonna be alright” on the West side of the Capitol, within view of where Biden is set to be inaugurated later this month.”

Immediately, there were comments from the Twitterati, who took offence to the use of the song in this manner. “As Bob Marley spins in his grave.” “Bob Marley? The [expletive] nerve!” “Singing Bob Marley, these people are absolutely confused.” “Marley’s grave will need tending to after this. Disgusting. Violence and ignorance are against everything he stood for.” “They do NOT get to sing Bob Marley.” Often misnamed Don’t Worry About a Thing or Every Little Thing is Gonna be All Right, Three Little Birds is not considered among the songs of protest penned by Bob Marley and the Wailers.

Queen of Reggae, Marcia Griffiths was quite surprised that the song was used in that manner. “How would Three Little Birds fit into an event like that?” the I-Three member demanded to know. “Sometimes, I would refer to us as the three little birds. That is a song that speaks to purity, peace and love. I know that they always use the Electric Slide and dance in the streets, but this song is different. They are missing the whole message and confusing the good, positive vibrations. This is a world of confusion. We need divine intervention and I am looking forward to it,” she told The Sunday Gleaner.

Mowatt shared that Marley’s musician often said that Three Little Birds was written by Bob for the members of the I-Three – Judy Mowatt, Marcia Griffiths, and Rita Marley. “Bob is not the type of person who would personally tell us that himself. Because even when we performed and did exceptionally well, he didn’t commend us, perhaps he didn’t want us to get swell-headed and drop our standards. Bob was a perfectionist. But our musicians would come back and say, ‘Bob really pleased about tonight’. And they always told us that this song was written for the three of us,” Mowatt said.

And as one of the three little birds, this song is special to her. She related a story of being at an event and feeling a bit nervous about a particular situation as she was about to enter centrestage. However, when she took the stage, there was a man standing in the crowd wearing a T-shirt with the message from Three Little Birds – “Every little thing is gonna be all right”. That did it for her. “Bob was long gone, but those words lifted me and gave me the right encouragement at the right time. I was instantly calmed,” she said.

Mowatt believes that Bob’s words in this situation would have been, “That’s not the purpose of my song.” She added, “Bob’s purpose had so much that was people-oriented — to bring strength, encouragement, and destroy fear. He was about everything that stood for equal rights and justice. Bob’s music stood for the love of the people, and it didn’t matter if you were black or white. It was all about humanity.”

Three Little Birds is the fourth track on side two of Bob Marley and the Wailers’ 1977 critically acclaimed Exodus album. Released as a single in 1980, it reached the Top 20 in the UK, peaking at number 17. It is one of Marley’s most popular songs and has been covered by numerous other artistes.