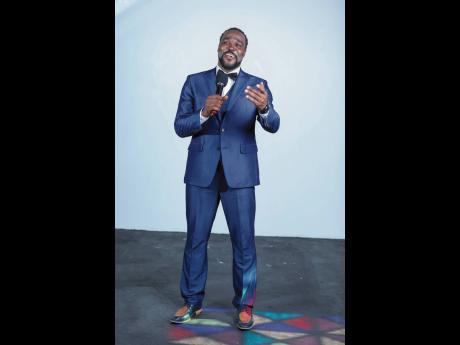 Contributed
Manchester musician Bunny Rose is eager to take the stage at the Jamaica Jazz and Blues Festival.

The stage is an unusual place for a rose to bloom, but come next week, Manchester musician Bunny Rose will blossom at the Jamaica Jazz and Blues Festival as he brings his acute musical talent to the world stage. Aiming to do so in fine style, Rose told The Gleaner that when he graces the Jazz and Blues stage, he intends to bring international flavour.

“I don’t do reggae, I do opera, classical pieces. I sing in six languages, [including] Latin, Italian, German, Mandarin and English. I hope to add French soon. Somebody was entertaining some Chinese guests and needed someone to sing some Mandarin songs and so I learnt them. My clientèle knows what I offer and there is something for everybody in my repertoire,” he said.

Multifaceted, Rose intends to display his wide vocal range and also pay tribute to the talented international acts who have graced the festival’s stage. “I call myself a lazy tenor, a baritone approaching a tenor, just on the cusp. I have the lower register and I can hit the high notes as well. It’s a wide range, with that mellow spot where the sound is anchored. For Jazz, I will be doing a tribute to past international acts – Jeffrey Osbourne, George Benson, John Legend, Michael Bolton, and Billy Ocean. For each, I chose one of their most popular songs,” he said.

The entertainer, who is the most recent addition to the Jazz and Blues line-up, said his manager reached out to the festival organisers as they believed he would be the perfect fit. He said like his colleagues in the industry, he has been staying connected with fans via virtual events and saw the Jazz and Blues stage as another opportunity to do so. “My manager, Nerissa Salmon, saw the promos about Jazz and Blues and she reached out to Marcia (McDonnough, co-organiser of the festival) and I am so excited about it,” Rose shared.

As he looks towards performing on the world stage, he said Jazz and Blues is just another step in the journey, and one he is sure he will never forget.

Describing himself as one who always loved singing, Rose revealed that he taught himself to play five instruments. “As a child, people around me would collect money and tell me to sing. I remember there was a piano at the Windsor Lodge Children’s Home where I lived, and I was always banging away at it. I loved the sound. When I was around 13 my foster parents signed me up for piano lessons, and that was the true start of the journey,” he said.

The entertainer has big dreams of making it on the international music scene; those dreams include performing with Celine Dion. “Last year, I went to Celine’s concert in Florida and although she didn’t know it, I sang along with her when she sang The Prayer. I sang the male part,” he shared. He has done a solo recording of the The Prayer and says he loves it because of the different languages. “I find that music is communicating through sound and you don’t have to understand the words, it is the different nuances. I don’t need an English translation of what I am singing, the music speaks for itself. People have said to me, ‘How you sing in Italian, you know what you singing?’ The music speaks to me,” Rose said.

Performing with Italian opera singer Andrea Bocelli is high on Rose’s bucket list. He also wishes to have Canadian-American musician and composer, David Foster, produce an album of his.

The virtual staging of this year’s Jamaica Jazz and Blues Festival is set to take place next weekend. Lila Iké, Sevana, Tessellated, Zia Benjamin, Richie Stephens and others have all been billed to perform.