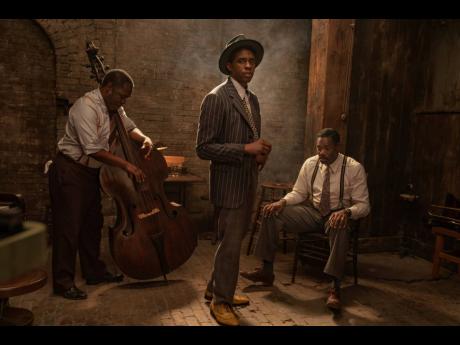 Chadwick Boseman’s wife Taylor Simone Ledward encouraged people to get screened regularly for cancer after accepting a posthumonus accolade on behalf of her husband at the NAACP Image Awards.

The late actor - who died last year as a result of complications related to colon cancer - won two gongs at the awards ceremony last Saturday night, including Best Supporting Actor and Best Actor, and Taylor used the opportunity to urge people to take better care of their health.

She said: “As always, all honour and glory to the most high God. He would thank his mom and dad, and he would give honour to the ancestors.”

Taylor observed that while the late actor had an “uncommon” talent, the manner of his death “is not uncommon at all”.

“Don’t put it off any longer, please get screened. This disease is beatable if you catch it in the early stages and don’t have any time to waste even if you have no family history.”

Elsewhere, Eddie Murphy was inducted into the NAACP Image Awards Hall of Fame.

The Coming 2 America star said: “I’ve been making movies for 40 years now. This is the perfect thing to commemorate that, to be brought into your hall of fame.”

The annual ceremony – which celebrates black excellence in film, television, music, and literature – was hosted by Anthony Anderson and even featured an appearance from US President Joe Biden and Vice-President Kamala Harris.

Announcing this year’s winner, Derrick Johnson, NAACP president and CEO, said: “LeBron James, ‘the chosen one’. A name befitting an individual so keenly aware of the platform he has built with his athletic skills. And yet, like all black athletes, he is all too familiar with the risks involved with raising his voice against systemic racism. But just as he has done on the court, he rises to the occasion on behalf of our communities and lends himself to the need for progress and true equality.”