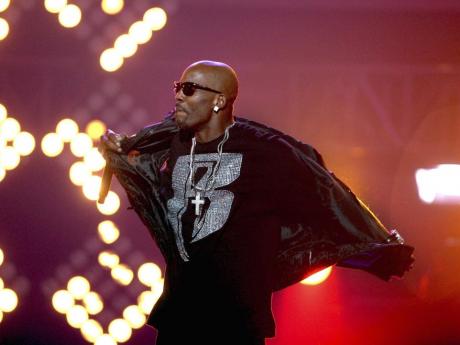 DMX performs during the BET Hip Hop Awards in Atlanta on October 1, 2011. The family of the rapper says he has died at age 50 after a career in which he delivered iconic hip-hop songs such as “Ruff Ryders’ Anthem." (AP Photo/David Goldman, File)

NEW YORK (AP) — DMX, the raspy-voiced hip-hop artist who produced the songs “Ruff Ryders’ Anthem” and “Party Up (Up in Here)” and who rapped with a trademark delivery that was often paired with growls, barks, and “What!” as an ad-lib, has died, according to a statement Friday from his family.

The Grammy-nominated performer died after suffering “catastrophic cardiac arrest,” according to a statement from the hospital in White Plains, New York, where he died.

He was rushed there from his home on April 2.

His family’s statement said DMX, whose birth name was Earl Simmons, died with relatives by his side after several days on life support.

“Earl was a warrior who fought till the very end. He loved his family with all of his heart, and we cherish the times we spent with him,” the family said, adding that his music “inspired countless fans across the world, and his iconic legacy will live on forever.”

Memorial plans were not yet set.

DMX built a multi-platinum career as one of rap’s stars in the 1990s and early 2000s, but he also struggled with drug addiction and legal problems that repeatedly put him behind bars.

He made a splash in rap music in 1998 with his first studio album, “It’s Dark and Hell is Hot,” which debuted No. 1 on the Billboard 200 albums chart.

The multi-platinum-selling album was anchored by several hits including “Ruff Ryders’ Anthem,” “Get At Me Dog,” “Stop Being Greedy” and “How It’s Goin’ Down.”

Survivors include his 15 children and his mother.