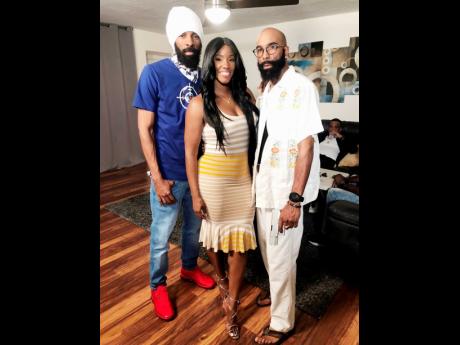 Dancehall artiste Spragga Benz has recently been teasing and exciting fans with pictures of a script and seconds worth of behind-the-scenes clips of a new movie project titled Second Chance. Filmed recently in Florida, USA, the movie wrapped up on April 29 and producer, Cleon James, told The Gleaner that he is looking forward to a summer release.

The CEO and founder of the Boston, Massachusetts-based Top Notch Vision Films, James is an independent film-maker who has already written and produced five feature films. Second Chance, his sixth, is based on a true story about “the struggles people go through to gain the opportunities they want”. The project, the Jamaican admitted, has faced many challenges, which were exacerbated by the COVID-19 pandemic, but the ever-optimistic James remains undaunted.

“One of the main challenges was funding, but we moved ahead and did it by ourselves,” explained the man who also wears the scriptwriter and director hats. “Then, owing to the COVID restrictions, everything shut down, and because we are based in Boston and intended to film in Miami, that was another level of hurdles. We couldn’t fly out to visit locations, so we had to do all that, as well as the casting call, via Zoom. And that made the entire production take longer than originally planned,” James further stated.

The film’s main characters are Spragga Benz, who plays David; Merlisa Determined, who plays Dana; and Jhonn de La Puente as Alpha. According to the synopsis, “David, a recent graduate looking to land a role in corporate America and soon finds himself stuck with a tough decision.” James shared that his decision to cast Spragga Benz as the lead was by design rather than chance. He had worked with the dancehall artiste and actor in the past, and they had kept the link. “I had a project in 2012 titled Green Card, and Spragga was a part of it. Then, when I released Trust in God, he called, and he was mad (he wasn’t included). However, I had this other movie script which is based on a true story told to me by the pastor who had officiated at my wedding ceremony. I told Spragga about it, and it was a go,” James said.

He then had to tweak the script, since originally it had been written from a Christian standpoint, and Spragga Benz is Rastafarian. “But there is a lot of spiritual stuff in the movie, which will appeal to a wide audience, and also, there is no swearing or any kind of profanity,” he added.

James was generous in praising the dancehall star’s work ethic. “Working with Spragga was fun and entertaining; he came prepared every single day and gave 120 per cent. We did the filming in two and a half weeks, working 22 hours every day. We had a night shift and a day shift. So those who had night scenes would sleep during the day and vice versa. But Spragga was in most of the scenes, so he was only able to take a quick nap in-between scenes,” he noted.

It was in the 2002 film, Shottas, that Spragga Benz first thrilled moviegoers. Shottas, written and directed by Cess Silvera, also starred Ky-Mani Marley, Paul Campbell and Louie Rankin. In Second Chance, Spragga Benz is not the only dancehall rep, as veteran selectors Tony Matterhorn and Supa Twitch also have roles.

Currently in the editing room with his team, James is “pleased with what [he] is seeing”. He is also planning to host premières/meet-and-greets in at least three states in the US, and ideally, would want to have one in Jamaica as well.

“We are looking at August 7 to host a première in Ft Lauderdale, which is the predominantly Caribbean city in Florida, and we have to go where our biggest support is. However, we are exploring having Second Chance shown on either Netflix or Amazon, as we believe it will take some time before cinemas, which are due to open soon, start attracting large audiences again,” James stated.