Clarendon to get drive-in cinema 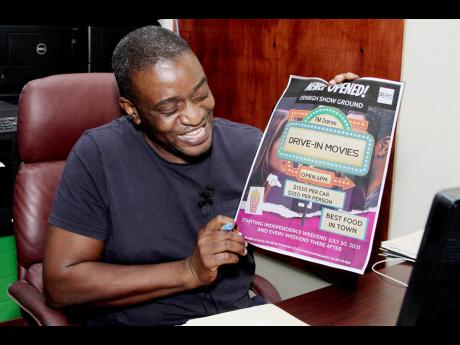 Movie lovers in Clarendon are in for a treat come July 30, as Net Merge Corporation, a May Pen-based information technology company, will be launching a drive-in cinema on the grounds of the Denbigh Agricultural Showgrounds.

Everel Morris, chief executive officer of Net Merge, told The Gleaner that his team will be airing second-run movies in the parish every weekend or as movie enthusiasts demand. Second-run movies are motion pictures which have left first-run theatres.

Sharing that the plan was conceptualised during the pandemic, Morris said he felt it was his civic responsibility. “I was thinking about a way we could do something that is socially responsible for the community — helping our customers and the community to socialise a little bit without breaking any of the protocols. I thought the drive-in movie was excellent because you’re staying in your car and you’re still wearing your masks and doing all the other required procedures, and it would be something the family, individuals and everyone with a car could enjoy. So we thought that was a great idea,” he said.

Noting that the feedback thus far has been amazing, Morris says he hopes patrons will show their support, come Friday. “It’s a new idea [and] something new to Clarendon. We think it’s an historic event, so we hope people will show up and turn out and enjoy themselves.” Morris said.

Net Merge has gotten the green light to show movies, including Bad Boys For Life, starring Will Smith and Martin Lawrence. He noted that Disney movies would also be screened for the younger audience. “We keep an eye on what’s in the movie and the reviews. We get to see what others already saw and what the reviews are, so we pick from that pool and see what movies have great reviews and great feedback,” he said.

Movie tickets will be sold at the gate at the cost of $1,550 per car and $550 per person. “We think the pricing was well researched and reasonably priced. If we said the movie ticket is gonna be $2,000 if four persons showed up, it would be $8,000 on a family, and we think that would be really hard. So when you combine the price for a family of four, it would cost about $3,650 total,” he explained. Refreshments will also be on sale at the venue.

Councillor for the Denbigh division, Joel Williams, described the initiative as an “excellent idea”. Rowhan Blake, chief executive officer of the Clarendon Municipal Corporation, told The Gleaner that plans to get the venue ready are underway. “The corporation is facilitating the initiative because we realise there is not a lot of entertainment in May Pen, so it’s definitely something the corporation supports,” Blake added.