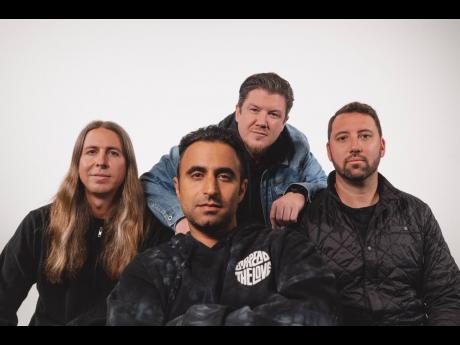 California-made reggae band Rebelution might have performed without Kabaka Pyramid and the Bebble Rockers to a sold-out show at the Red Rocks Amphitheatre in Morrison, Colorado, yesterday, but the musicians are still focused on bringing good vibes to the stage. The Jamaican performers are sitting out two weeks of the Good Vibes Summer Tour 2021 to adhere to the Centers for Disease Control and Prevention’s recommended COVID-19 protocols.

“It’s our first tour since the pandemic; we hadn’t played together for over a year and a half, and we really missed performing (so) we are just looking forward to getting to all our old stops on the tour. Plus, the fans are ready. We have been honoured to have Kabaka, as well as Keznamdi on the road with us, and it’s been fun performing with them live,” Eric Rachmany, Rebelution’s leadman and guitarist told The Sunday Gleaner.

In addition to Kabaka Pyramid and Keznamdi, the show’s line-up also included veteran reggae groups Inner Circle and Israel Vibration, who the Grammy-nominated band names as a major influence on their music.

“Don Carlos is a big influence on me personally,” he said. “We have performed with him many times and even had him featured on our song, Roots Reggae Music, on one of our earlier albums, Count Me In. Other legendary artistes and groups like Israel Vibration, Steel Pulse, Black Uhuru, Culture, Roots Radics, Mighty Diamonds are all big influences on our band.”

The lead musician shares that as their music is continuously interconnected with the reggae genre and the band is added to reggae festivals globally, they have seen the significance of collaborating with and promoting Jamaican artistes that represent African heritage and Rasta culture, along with the culture of the island that gave birth to reggae music.

Rachmany explained, “It is really important for us to promote Jamaican artistes that represent the points I mentioned. I think, for the most part, the artistes and bands from America are doing just that but as much as reggae music is loved and listened to all over the world, it is still a tiny scene here. The fact of the matter is that there’s so much incredible talent from Jamaica, and the support we get from them has been incredible.”

He further explains that as the genre gains popularity across the US, there is a need for Jamaica-based acts to receive the exposure they deserve. “Any time we bring a Jamaican artist with us on the road, the crowd just goes crazy for them. As the genre becomes more popular here, we feel like more and more of these great artistes need to be exposed, and we want to contribute to that by inviting some to join us on the road and on our albums. The opportunity is rising with more festivals popping up than ever,” he said. “My hope is that festivals that use the word reggae in it actually bring in Jamaican acts. The reggae-inspired music many American musicians make cannot solely represent the genre as a whole. Reggae is way too deep-rooted in other aspects that need to be showcased. I think, for the most part, festival promoters and bookers are on the right track with this, but it continually needs to be emphasised so that people understand the difference between the reggae music Rebelution plays and where reggae music originally comes from.”

The group has had Protoje tour with them a couple of times, and Raging Fyah was featured on their 2018 Winter Greens Tour. Their touring colleagues Kabaka Pyramid and Keznamdi and dancehall veteran Busy Signal are featured on their seventh studio album, In The Moment, which was recorded and constructed remotely in the midst of the pandemic. The artistes sought out the expertise of director Yannick Reid and were also able to pull together for the filming of videos for their tracks, All Or Nothing with Busy Signal and 2020 Vision with Kabaka Pyramid. “We didn’t know what songs people would like the most from this album but had a feeling All or Nothing and 2020 Vision (which is a song about being prepared for any negativity coming your way) would be up there. 2020 was a tough year with a lot of unexpectedness, [so] we’re hoping for more touring in 2021 and maybe even another album in 2022,” Rachmany said.

The album infusing the quartet’s soulful, exhilarating brand of modern reggae with addictive pop hooks, alt-rock grit, and hip-hop grooves is a joint venture between the band’s 87 Music and NYC Easy Star Records. It is 15 tracks of conscious and wide-ranging lyrics that challenge perceptions and push listeners to live each day to the fullest, inviting fans to sit back, slow down, and live — as the name states — in the moment.

Rachmany shared, “I’ve never felt like Rebelution’s music was very similar to anything else in the reggae genre, and from the beginning, I never felt comfortable singing or writing lyrics about anything other than my own personal experience and surroundings, but I know I write a lot of lyrics about personal empowerment because of the reggae music that has influenced me. I only hope that it does the same for the listeners.”

Other notable tracks are Old School Feeling recorded on a traditional reggae beat that’s akin to a rhythm that features the Mighty Diamonds' 1981 single Pass The Kouchie but slower, and the rock heavy Simply Captivating, which Rachmany says was in the making for several years and was very hard to write and record.

“It’s a dream come true for us recording with artistes we respect. The genre is so diverse that it’s difficult to determine what is considered reggae music. When people say Rebelution is reggae, I honour that, but completely respect when people say it isn’t reggae music. We have our own sound that incorporates a lot of other genres of music. Reggae needs more recognition for the awareness and positive message, but also because it’s just good music that needs to be heard,” Rachmany said.

Washington and Montana will see Rebelution perform this week at the Spokane Pavilion and KettleHouse Amphitheatre, respectively, and then Oregon for the weekend when Kabaka Pyramid is expected to return to the stage with them on Sunday, August 29, at the Britt Pavilion in Jacksonville. The Good Vibes Summer Tour, which kick-started on August 5 in Fresno, California, will continue into September and October, with concerts scheduled for Las Vegas, Florida, Texas and New York.