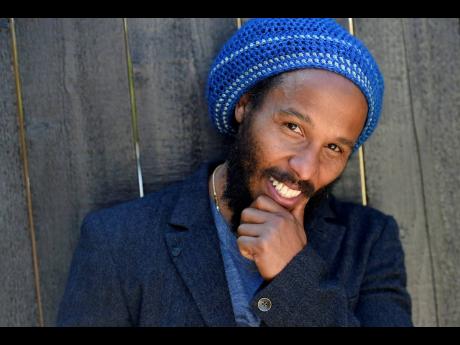 In true Marley style, Ziggy, the eldest son of reggae icon Bob Marley, has established himself as an entrepreneur, delving not only into writing and producing music, but also into the book, fashion, and pet-care industry.

Marley, who has stated that his interest in the pet community started with his dog, Romeo, the lagotto Romagnolo breed that he welcomed into his family last year just before the pandemic, recently launched a line of grooming products as well as a vegan, cannabinoid (CBD), wellness product for dogs. The line of dog health treats is cutely named Ziggy Marley Apawthecary and is marketed as “a collection of plant-based pet remedies”.

He connected with One Farm, a plant-based wellness brand, to produce the peanut butter-flavoured Romeo’s Agility Chews, which, according to a release, is “a supplement to help dogs’ prolonged agility, fight inflammation, and support overall mental and physical wellness”. Organic ingredients include shiitake mushrooms, cordyceps fungus, and turmeric.

According to the eight-time Grammy award winner: “Health is incredibly important to me. Playing soccer almost every day, my knees have felt the impact over the years. When I saw how active Romeo was as a puppy, I knew I needed to take care of his joint health now to help prevent problems in the long run.”

He has also invested in grooming products. Marley told petage.com that he and his wife wanted “something that is good for dogs and also good for the environment and good for the family”, and that led to a collaboration with scientist Anja Skodda, the founder of HAPPYBOND. Together, they launched HAPPYBOND x Ziggy Marley Grooming, a product line consisting of a no-wash refreshing spray, a deep-cleansing shampoo, and a leave-in conditioner.

Romeo was also the inspiration for the song My Dog Romeo, an ode to the pet, which opens with Romeo barking in the foreground. And the spin-off is a book of the same title. Marley’s other children’s book is titled Little John Crow. He explained in an interview with etcanada.com that the “John Crow is what we used to call the vultures in Jamaica” and praised his grandaunt, who would tell him and his siblings “typical Jamaican stories about Anansi and duppy stories”.

The message in Little John Crow is “about finding yourself, accepting yourself, and fulfilling your destiny … A big superstar is just as important as somebody who does a menial job”.

In April this year, the entrepreneur made a fashion statement when he linked with Appaman, a New York-based kids’ clothing line, for a seasonal, capsule collection of graphic Tees and knit shorts. The collection was launched at Appaman.com and exclusive retailer Nordstrom and Nordstrom.com.

He added: “It brings my consciousness back to the moment of understanding that these are God’s creatures. This is another living being, and I’m feeling his heartbeat. I’m feeling his warmth and his energy. For me, just looking into his eyes, I see a personality in his eyes. He loves us. The love that he has is what I see in him. The love that he has for us. It’s a real thing.”

Ziggy Marley, who went to the studio with his father as early as 10, started his career as the leader of the group Ziggy Marley and the Melody Makers. The owner of the Tuff Gong Worldwide label, he has so far released 13 critically acclaimed albums. His first solo album, Dragonfly (RCA Records), was released in 2003.