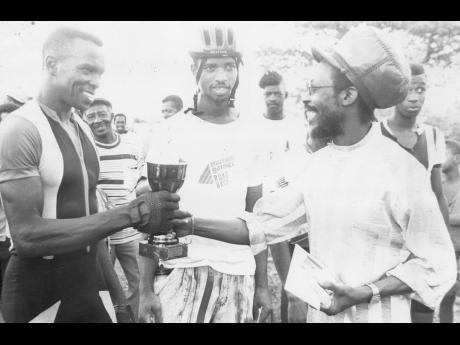 Gleaner Photo
Garth Dennis (right) presents Michael McKay (left) with the first prize trophy after he had won the 'A' and 'B' Class 30-lap Cumberland Criterium cycling race. The event was sponsored by the Black Uhuru Cycling Club. A founding member of Black Uhuru, Dennis died last Thursday. He was 72.

Reggae recording musician Rudolph ‘Garth’ Dennis, one of the founding members of Grammy Award-winning group Black Uhuru and later a member of The Wailing Souls, has died. He was 72, having celebrated a birthday on December 2.

International music business consultant Lloyd Stanbury confirmed that Dennis passed away on Thursday and that the news is like a “double blow” for all the musicians within the circle.

“This is really difficult for everyone who knows Garth. Most of the musicians would have heard of Robbie Shakespeare’s passing two days prior, and they were united in many ways. Mykal [Rose], who was with the group, having just lost Robbie, was in great distress to hear of another on Friday,” he told The Gleaner.

He added, “Everyone is hurting to hear of Garth’s [passing]; as I said, they are suffering a double blow.”

Dennis' cause of death was not immediately known. “I was not aware that he was ailing,” Stanbury said.

He spoke of Dennis' many achievements and quiet disposition. “Garth is one of the quietest persons someone could encounter, in terms of what he has accomplished and done over the years with Black Uhuru, at two different periods of times, and also Wailing Souls. I interacted with Black Uhuru in the earlier days and have been closely associated with several members — as you know, the group has undergone several changes and variations — but he is coming from the foundation,” he said.

As a member of Black Uhuru and later The Wailing Souls, which had hits like Things and Time, Jah Jah and Shark Attack, Stanbury said Dennis has left an indelible legacy.

“Garth shared in two of the great groups that originated in that time and continued contributing to the music. Now, we see where his sons are also making their mark, following in his footsteps by founding a group, Blaze Mob, out of California. I can imagine it is hard on them and his wife,” Stanbury continued.