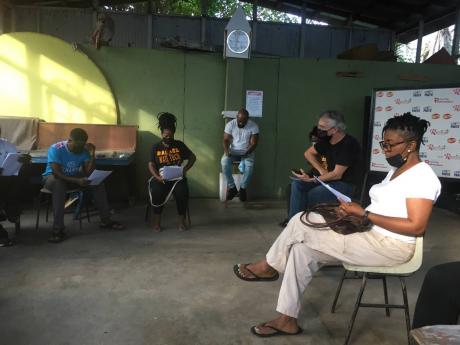 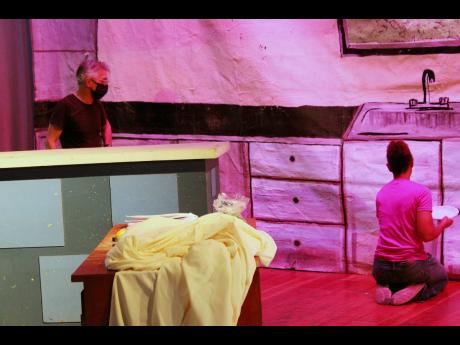 Contributed
The making of the set for ‘Rebel K’. 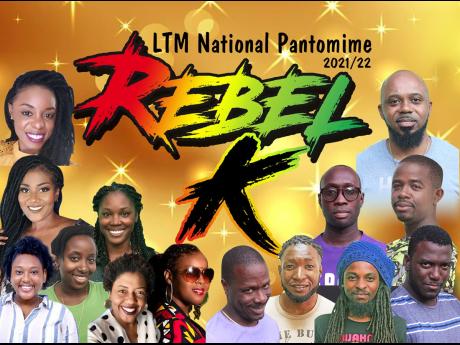 On the Jamaican theatre landscape, Boxing Day is synonymous with the premiere of the annual pantomime, which has been produced by the Little Theatre Movement (LTM) for decades. On Sunday, despite entertainment still on lockdown, panto continued it long-standing Boxing Day tradition.

Although the cast was not playing in front of a live audience, they brought Rebel K to life in the virtual space on YouTube, Facebook and on PBC Jamaica. Last year, for the first time in 78 years, the LTM did not open a new production on Boxing Day. Instead, they offered a concert titled Nah Give Up, which drew on the songs and scenes from past pantomimes and which had a message of resilience.

Production coordinator Anya Gloudon, who is carrying the baton handed to her by her mother Barbara, is mother hen-proud of the cast which has been in rehearsals tirelessly since November, without even a stipend “and only bruk curfew one time”. She also praised them for their perseverance, which saw them reading the script from their phones, when physical copies just could not be printed.

Gloudon is quite excited at being able to create during these trying times, even if Christmas and Boxing Day “felt odd”.

“On Christmas Day, I would spend half of it celebrating and the other half doing last-minute costume stuff. But [on Saturday] I was bored; I had nothing to do, because we had already filmed from last week. Normally, at this time today [Boxing Day] we would be at the Little Theatre from early, screaming at each other and preparing for the big opening night. But the great thing is that we could keep the tradition of pantomime going,” Gloudon told The Gleaner.

Commenting on Rebel K, she stated, “We based it on Johnny Reggae, which was a production which we did in the ‘70s, and then had a reboot in the ‘90s called Reggae Son. We decided that this time we would focus on a female — nobody wanted to do anything about COVID. So we have a young lady from uptown who likes music, but her mother thinks that it is not the appropriate career for her, so right there we have the parent-child struggle. Anyway, she pursues her career and buss big. And with this being panto, there are many twists and turns.”

Among the cast members are Latoya Newman, who plays Rebel K; Ryan Bailey, for whom Gloudon had a special shout-out, owing to his dedication, which saw him driving from Portland to Kingston for rehearsals, without a stipend; Kevin Halstead; Keisha Kong-Scarlett; Ray Jarrett; Alison Latchman of Cabbie Chronicles fame; and director Pierre ‘Avacado’ Lemaire.

“Grub [Cooper] graciously worked on the songs, and one of our cast members, Derrick ‘Khafari Moor’ remixed two panto songs. A couple past cast members gave us some money to buy paint for props, and everything came together. We have a saying in Jamaica that ‘no matter how hard t’ings get, we come together ‘nd we ban’ we belly and mek things happen. Mi proud a dem,” she declared.

Rebel K will be aired today on LTM’s YouTube and Facebook platforms, as well as on @pbcjamaica at 6 p.m.