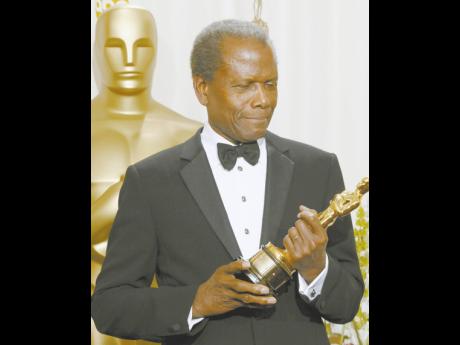 Voice Photo
Sidney Poitier holds his honorary Oscar at the 74th annual Academy Awards in Hollywood March 24, 2002. Poitier received his award for his “extraordinary performances and unique presence on the screen and for representing the motion picture industry with dignity, style, and intelligence around throughout the world”. 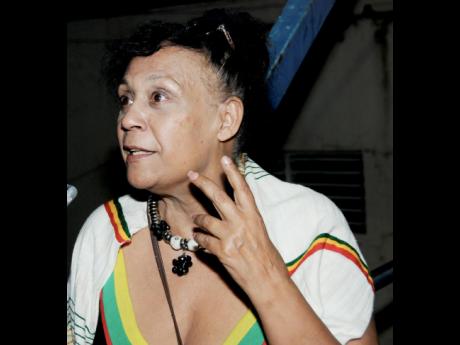 Jamaican filmmaker and photographer Esther Anderson, is also known for her work with Chris Blackwell’s Island Records and her career as an actress. She secured roles in a number of early 1960s British television shows, including Dixon of Dock Green and The Avengers. She played roles in movies such as Henry Levin’s Genghis Khan for Columbia Pictures; Robert Freeman’s The Touchables for Twentieth Century Fox; Ted Kotcheff’s Two Gentlemen Sharing; Jerry Lewis’s One More Time for United Artists, and Sidney Poitier’s A Warm December for First Artists. In this latter film, her role of an African princess won her a NAACP Image Award for Best Actress in 1973.

Here, she speaks with The Gleaner about the late Sidney Poitier.

1. How did a young girl from St Mary wind up on the silver screen with the likes of Sidney Poitier?

I arrived in Kingston from St Mary to go to shorthand and typing school, but I was useless. One day, I was at the Jamaica Yacht Club and two ladies called me over and questioned me. I was only 15 and with the consent of my grandmother, I was allowed to enter the Miss Jamaica beauty contest. After a year of grooming, I won the contest but was almost eliminated because of my age. I was meant to be 17, so I was placed third. Among my prizes was free pass to the cinema for a year. I was filmed leading the Commonwealth athletes into Sabina Park, and it the first time I saw myself on the screen at the Carib Cinema, and I felt very proud.

Martine Beswick was also a contestant and we became friends, and she encouraged me to come to England with her and some of the other contestants. I left Jamaica in 1962 and landed in London at age 17. We got a flat in Chelsea overlooking the Thames. Chris Blackwell turned up, and I went to live with him and started Island Records UK. Martine and I and Chris Blackwell celebrated Jamaica’s Independence on my 18th birthday.

When Chris Blackwell and I parted, I studied drama at the Actor’s Workshop. I got my first break in Genghis Khan with Columbia.

2. Do you ever go back and watch your films, and what would you rate as your best performance?

Yes, I do watch them mostly with friends, which always seem to surprise them because I never acted like a movie star…I do like my privacy. I think as a serious performance in a drama, Warm December was the zenith. It was the best opportunity I had to deliver as truthful a character. An African princess, Oxford-educated with sickle cell when no one knew about the disease. I went everywhere I could to get information on sickle cell. Dr Ken McNeill, a family friend, opened his files to me and organised for me to do research at the UWI.

Same thing in Nassau, I visited the hospital and saw the sickle cell patients. I got emotional over the children, and in Paris a doctor and biologist friend, who had a laboratory in Africa studying the disease, opened his files and research findings to me.

It was then that I saw the girl in my mind’s eye and knew what I had to do with that performance. I knew deep down that the film, although it seemed like a love story, was really a way to introduce the sickle cell anaemia problem so that sufferers would come forward and have the test, so they could find a cure.

During filming at Logwood Studios in London, after a few important scenes the crew would clap after my performance – like I was on stage. I was moved by the film crew and stayed friends with most of the technicians to this day.

3. Is it true what they say – that Sidney Poitier was a gentleman?

Yes, indeed. He knew how to behave as a gentleman to us and the people he worked with. All my friends who know him in England held him in great affection and respect. Considering the hard life he had as a youth, he stepped into the unknown and made his findings his own. He stayed focused and forged through life with its tremendous obstacles and hurt, and fashioned himself into a superhero like the Count of Monte Cristo. He became another person, but he never forgot his youth. I loved him for that.

4. You gave up a promising career in film to be with Bob Marley in the ‘70s, do you regret that decision?

As for Bob Marley, no regrets whatsoever. We knew what we were doing, and I was committed to the cause of uplifting our beautiful island somehow. My only regret is that Bob Marley’s legacy seems to cause a lot of anxiety for so many. His name is used to sell airport trolleys, toilet paper and any other material things they can come up with.

Life with Bob Marley? I wouldn’t say it was fun. It was very hard work, as they had no idea what it meant to be a united band that had to tour to support the records and albums they would be releasing.

But we did get through, difficult as it was. We did take a break after the first tour and travelled across the island, from Kingston to the Blue Mountains, then to Negril, and built a retreat far away from the Kingston distraction, so that we could work and develop the music. After three years and three albums, they were through the door; and the reggae rhythm caught on easily as people love to dance, and Bob knew it.

Had Sidney Poitier not existed and allowed me the freedom to work opposite him, learning so much from him, I would not have had the funds to support the commitment I made to Bob.

5. If you could give a message to your 25-year-old self, what would that be?

My 25-year-old self? LOL. Had I the opportunities to continue studying, I may not have done drama but instead studied astronomy, science and maths and change my world – but I am trying to make up for that now.

6. Many people are wondering how come you have not been honoured in Ja maica for your work, although communities in the US have celebrated you?

I was brought up not to think of myself but of my country. I have no idea what really happens after I’ve done my bit. I come from a long line of humanitarians and from a Jamaica that was different – less materialistic. Being recognised by a new Jamaica is not vital to my work, or existence. I am nevertheless grateful to the American people who appreciated my work and acknowledged me for it.