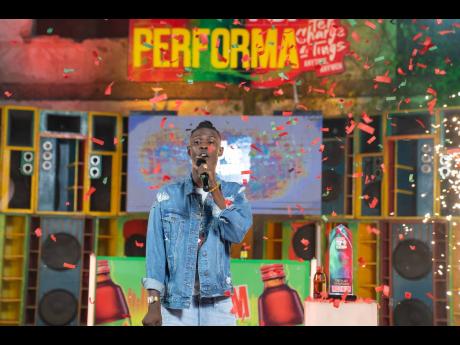 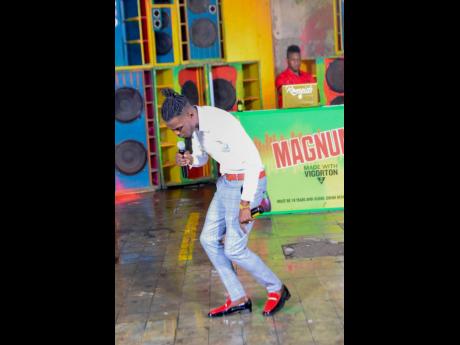 In an effort to continue providing opportunities and a platform for emerging artistes to be seen and heard, Magnum Tonic Wine, unofficially labelled “the drink of dancehall”, in 2021 staged their first ‘Magnum Top Performa’, a lyrical face-off competition.

Sixteen artistes clashed against each other every Thursday over 15 weeks, freestyling to ‘16 bars’ on rhythms played by a host DJ. The show had three rounds, the preliminaries, semi-finals, and the finals, which saw the crowning of the Top Performa.

After three months of intense lyrical battles and creative performances, King Calie, who hails from Red Hills, St Andrew, was crowned the winner during the live show on Television Jamaica last December. “My journey has been mountainous and testing, but equally as rewarding with the knowledge and experience it has given. Ever since I decided music was it, I met up on opposition. Mom wanted me to be a lawyer, so she fought music in the beginning,” the entertainer said.

He had praise for the tough mentorship of ace producer and songwriter, Mikey Bennett, as well as the instructions from Sir Phillip Clarke during his remarkable journey.

King Calie walked away with a cool million dollars, a music video, and a song that will be produced by Romeich Entertainment.

5 Questions With recently had a quick sit-down with the newly minted millionaire who admitted candidly that, “It took a few weeks for me to process it for it to start to feel real.”

1. How does it feel to be the first winner of Magnum’s Top Performa?

First of all, leaders lead. I am the first at many things. I was a part of the first cohort [of the] Master’s In Residence programme by Mikey Bennett up by the University of Technology (UTech) and also the first cohort of law students to ever set foot on UTech. I have been the guinea pig so many times in life that I can’t even count. Being Magnum’s first Top Performa is nothing short of a dream. You put in the work, and you get an opportunity to showcase said work, and it just works out, and everything comes together. I am the self-proclaimed King of the proscenium – so yea, it’s a great feeling. I like it.

2. Why did you start making music?

I was trying to evade music for a long time. I’ve always seen myself as a footballer like Bibi Gardner and Walter Boyd and dem. But, is a lot of things that caused me to want to do music. My brother Dane loves to sing, but he was shy, so I would always be the one who would be like, ‘Yea man, come wi dweet, man.’ So you find that I developed a passion for the stage just by accompanying him. My older brother used to be a part of this thing called Men In Black, where they go around the Corporate Area to churches and do sign language in like black lights. I used to travel with them and go from show to show. Big up Craig McNally, he was the brain behind that whole movement. However, it was just interesting to see how people digested their art and the feedback that they got, so that was another nudge in the right direction.

3. How did you get the name King Calie?

I was going by Shalom Calie before. When I got to law school, I clicked up with a few like-minded people. One such person was Jason Alliman, and when he learnt that I was doing music as well, he was always adamant about hearing my stuff. At the time, I didn’t have anything that was professionally recorded, but I did have a few demos, so I let him hear some stuff, and after hearing them, he was like – mi feel like yuh fi change Shalom to King and just work wid King Calie. He thought King Calie would have sold what I am doing more than Shalom Calie, and it rings better, suh from there I just adopted that name.

4. What was it like being a contestant on the Magnum Top Performa show?

Nerve-racking, very informative … it kept me on my toes the whole time. Big up the Jussbuss team, the Magnum team and Romeich Entertainment because the level of talent pool that they selected is indicative of the overall underground space. Magnum Top Performa gave me a good place to hit the ground running. Overall it was a great experience. I felt like an artiste in the space. From day one, everybody is just dealing with you like you are that artiste. All in all, it was a great opportunity and experience.

5. How did it feel to represent your community in that way?

My community is dear to me. Being able to represent the community on that level and being able to shout from the top of the mountain, ‘Red City no pity’ and just know seh yow, people a hear dat it was the greatest feeling for me. I think they appreciate the fact that the vision is to build the community from scratch, and they showed me that they appreciated that by stepping up to the plate. I didn’t have to personally do much to start the wheels turning on a community level.

You dabble in visual arts. Tell us about this passion.