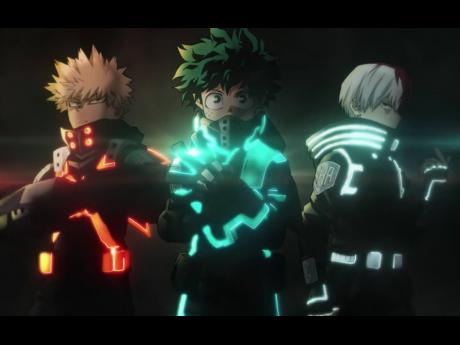 There’s always a certain pressure with movies. The giant screen and thundering speakers create an epic atmosphere. The cinema strikes a challenge for any film that dares to be worthy of its prestige. When a story makes that leap from the small screen to the big screen, it’s always going to be asked if it was worth it.

With My Hero Academia: World Heroes Mission, it’s a question that’s answered quickly, with an exciting opening. The heroes are engaged in a high-speed chase apprehending a would-be jewel thief. As they display their fantastic abilities, the camera seems to whip around in a manner only achievable by animation or costly visual effects. When the action gets going, World Heroes Mission challenges the viewer to keep up with its pace, offering a rewarding experience to those who can.

As the thrill ride comes to a stop, the film lets you off gently into a mystery. What was once thought to be jewels turn out to be documents uncovering a doomsday plot. A plot that makes a fugitive out of the story’s hero, Deku, and his thieving new friend, Rody Soul. The two embark on a road trip to clear their names and save the world.

The character of Rody offers a useful audience proxy for anyone unfamiliar with the My Hero Academia series. As he bonds with Deku, you get a sense of what makes the characters tick, getting you invested in their arcs. As it gets down to the wire, the film has lofty ideas of heroism and morality that it provides a satisfactory conclusion to.

The film is bookended by a grand finale that builds and builds until the screen is filled with visuals it doesn’t seem capable of handling. My Hero Academia: World Heroes Mission takes the challenge of cinema head-on, with an engaging plot, characters that resonate, and action that impresses and, in some instances, inspires.

Yet the movie is excessively functional. Certain characters seem to exist as mere obstacles and inexplicably disappear when the film no longer has use for them. The film has many elements serving a purpose, but doesn’t quite give them all a well-rounded treatment. Still, My Hero Academia: World Heroes Mission is a fun adventure that grabs your attention and rewards it, just don’t expect it to deliver 100 per cent.