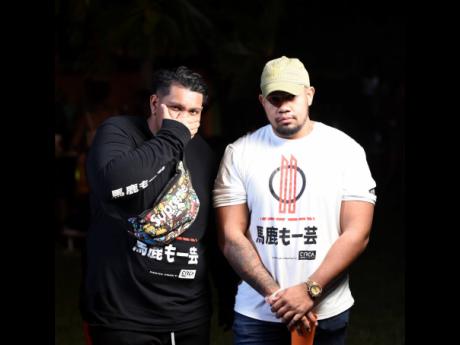 Eclectic production duo Circa Eleven has made their vocal debut with the newly released single, Interest.

The musicians, comprising brothers Phillip ‘circa.phil’ and Mark ‘circa.fatman’ Myers, teamed up with fellow up and coming acts Rizk and Mundo Don on the Latin-flavoured, wordplay-filled track which centres around investing in your lady love, once said investment accompanies worthwhile interest.

Fun visuals premièred on Friday with a bevy of belles, beachy, tropical scenes, boardroom theatrics and a flirty date night. Phillip told The Gleaner that they are targeting the diaspora with hopes of tapping into the Latin market.

“There’s zero expectations, to be very honest; we are just creatives sharing our art and how we perceive life,” he said. “At the end of the day, we just want whoever is seeing or hearing this record to feel our passion and our vibe.”

It was an organic vibe for the brothers who have worked with Rizk and Mundo Don on several occasions. Rizk, a Jamaican genre-fusing artiste, visited their home studio one day following a session they had with two-time Grammy-nominated virtuoso Mundo Don. The latter decided to stick around as they bounced ideas off each other.

“One day, we were in the studio, just parring and was feeling very inspired by Latin music,” Phillip said. “We were listening to a lot of bachata and reggaeton and decided to just throw a little dancehall seasoning on top of all that. I started off playing the melody on the keys and then decided to add in some Latin percussion. The rest kinda just fell into place, and I decided that this track was too groovy for Circa not to be on it vocally. We’ve been toying with the idea of using our vocals more.”

While Interest is their first vocal performance, Circa Eleven is no stranger to being in the spotlight, and Phillip said the venture feels natural. As musicians and DJs, they have performed at events including Reggae Sumfest, Appleton Rum Festival, Dream Weekend and St Martin’s Heineken Regatta. Their credits extend to working with artistes like Kymani Marley, Tessellated, Mortimer, Stylo G, Jahmiel, Laalee and Ramriddlz.

The duo is currently working on productions alongside Tessellated, Rizk, Mundo Don and other local and international acts. They also intend to release one vocal track per quarter for the rest of 2022.