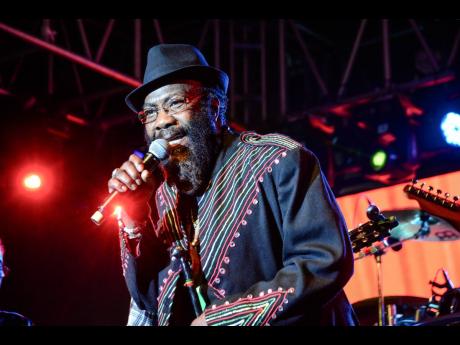 Veteran Rastafarian reggae singer, Denroy Morgan, has died. His son, Mojo, confirmed to The Gleaner that the music industry giant passed away on Thursday. He was 76.

A statement released by the Morgan family this morning noted: "It is out of our sincere love that we share that our beloved father and patriarch, The Honourable Ras Denroy Morgan, has ascended. Daddy has been our light, our source of love and joy all our lives. Our family thank you in advance for your overwhelming love and support, and we ask for your continued prayers as we go through this process. We also ask that you respect our privacy during this time of healing."

Morgan is survived by his widow Hyacinth Morgan, his 30 children, 104 grandchildren and 15 great-grandchildren.

The father of Grammy award-winning sibling group Morgan Heritage, as well as LMS, Denroy Morgan released his Billboard chart-topping hit I'll Do Anything For You and album of the same name in 1981. He signed a deal with RCA in 1984, and his bio states that Denroy Morgan was the first Jamaican recording artiste to be signed to a major record label.

Born in May Pen, Clarendon, Morgan migrated to the United States in 1965 at the age of 19. He was part of the formation of the Black Eagles, a New York City reggae band in the 1970s, before launching a prosperous solo career in the 1980s onwards. Morgan subsequently raised a large family and made the parish of St Thomas his home in Jamaica.

Last year, Morgan released his first book, From the Cross to the Throne, a novel that explores Rastafari, the religion, and Rasta 'livity'. He established his own Abrahamic Covenant Family Ministry, which goes live on Facebook every Saturday from his Hilltop Tabernacle in Port Morant, St Thomas.

An advocate for the legalisation of marijuana, Morgan spoke freely of his joy when it became legal in Jamaica and around the world.

In 2017, Denroy Morgan received the Key to the City of Brooklyn, New York.