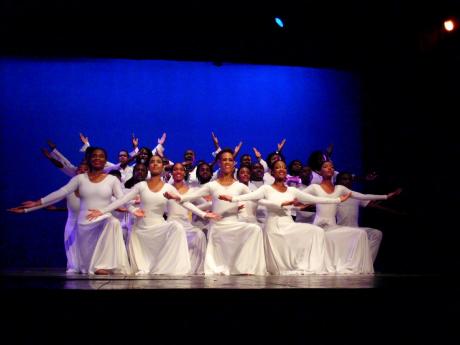 Michael Reckord
The NDTC singers and dancers in the finale to the concert. 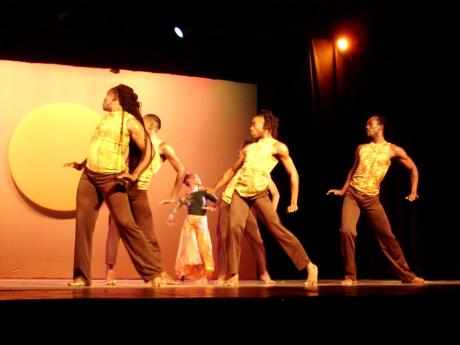 Michael Reckord
The Company in a dance by Rex Nettleford.
1
2

Of course, the National Dance Theatre Company (NDTC) did not die in the pandemic. But they had refrained from giving live shows for the past two years, so their return to the stage of the Little Theatre on Easter morning was a resurrection of sorts.

It was a joyful and triumphal one. The dancing, singing and instrumental music by the two performing groups of the company were excellent throughout the hour-long show – lasting from 6:03 a.m. to 7:05 a.m. – and the audience showed its appreciation by applauding after practically every item.

Lead female dancer and ballet mistress Kerry-Ann Henry said that before the show, she was feeling “expectant” because the dancers were looking good in rehearsal and there was no need for either “anxiety or trepidation”. After the show, she felt “exhilarated”. She was describing her emotions in a post-show chat at the stage door with The Gleaner and choreographer Clive Thompson.

The latter’s creation, Vision (1995), was one of the highlights of the morning. It was danced by Mark Phinn and Ashley Bromfield, who, both dressed in full white, flowed gracefully around the stage to sonorous recordings of Williard White’s Deep River and Aaron Neville’s Ave Maria.

Henry had a solo dance early in the show. Wearing a short, sleeveless, brown dress, which showed off her own graceful limbs, she stayed upstage in a rectangular pool of light, seemingly fenced in by a length of knotted white cloth on the floor. Despite the distance, her emotive movements – to A Prayer (2002) and Jevella Steele’s Fieldhand – were projected powerfully to the audience. There was victory in her walk as she exited the stage carrying the cloth high above her head.

Gratitude (2022), choreographed by Paul Newman and danced with energetic understanding by Dwauntea Chambers, was the only new work. It was created to a recorded song, Thankful, and it might have been done specially for the Easter concert as praise and thanksgiving was a pervasive theme. This was clear from the opening number, Rex Nettleford’s Crown Him With Many Crowns.

The dancers used the piece as a warm-up exercise, but the NDTC Singers, accompanied by their musicians on drums, keyboard and bass guitar, showed they had already tuned up. Their voices were full, rich and textured as they sang the well-known hymn after which the dance was named. After the dancers left the stage, the singers and musicians continued the praise-filled start with Handel’s Thine Be the Glory.

Two hallmarks of the NDTC’s ‘Easter Sunday Morning of Movement and Music’ are a fast pace and variety, and both were demonstrated at the concert. A special one, in that it marks the first big celebration of the company’s 60 years of existence, it should be followed in the summer, the pandemic allowing, by the annual Season of Dance.

The variety was evident from the early items, with the first five being of different forms. The third item was a poem, The Easter Flower, by the first internationally acclaimed Jamaican poet, Claude McKay, which featured an empty stage shrouded in a half-light. The unseen (recorded?) reader was Derek Been.

The fourth item was a beautiful rendition of Cėsar Franck’s Panis Angelicus by soloist Christine Walters, and the fifth was Henry’s aforementioned solo dance. After that, the forms of the pieces started repeating, but the rapid flow of the items continued, so that in total more than a dozen items were presented in the hour. There was just enough space between the numbers for the audience to take a breath after the cheers and applause.

The gratitude continued with items like Milton Sterling’s He Watcheth (1996) to the popular song His Eye is on the Sparrow, featuring four of the company’s very capable junior members, Shadė Thaxter, Mishka Williams, Jada Buchanan and Joelle Flimn. Dressed in orange outfits, suggesting the sun, the dancers continually lifted their arms heavenwards, and even though the dance ended with them lying on the floor, their heads were lifted upwards.

The traditional ending to the concert is the performance of Marjorie Whylie’s arrangement of The Lord’s Prayer and Noel Dexter’s composition for Psalm 150 by the singers, complemented by the dancers running, twirling and leaping on and off the stage. All face the audience, hands raised in celebration, before the final curtain.

On Sunday, the ending was as powerful as ever and held a suitably special poignance.