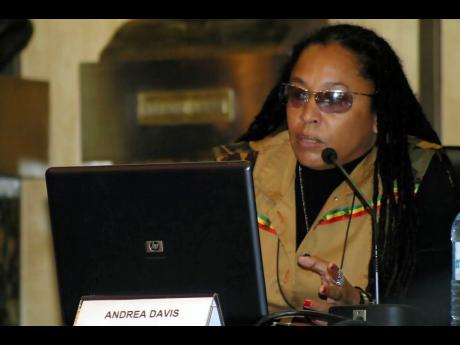 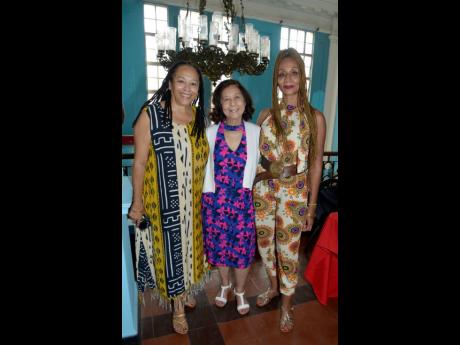 Nicholas Nunes
From left: Andrea Davis, Patricia Chin, and Nadine Sutherland at the 9th Annual Grounation Series at The Institute of Jamaica, on February 23, 2020.
1
2

(For this special Mother’s Day celebration during the year of Jamaica 60, the Entertainment Desk is featuring some of the women who have made outstanding contributions to the fields of music and culture.)

In the reggae genre, no other earthly figure has been idolised more than ‘mama’. As a cultural curator and advocate for reggae music, Andrea Davis has exhibited all these qualities says Grammy Award-winning artiste Gramps Morgan.

She is the protector in the list of women who have mothered a musical nation, he said. “Andrea has been friends of the family and we eventually started working at JAMPRO on an event that was kept in France in 1998, that’s over 20 years, and since then she has been locked in our hearts. She is like a sister to us and mother to many.”

Davis’ work with Morgan Heritage exceeds more than that of a tour manager, he said, as she has served as a consultant and guided them in the logistics of executing the notable East Fest event. Similarly, she has served in the role of manager of Toots and The Maytals and consultant to many others including Diana King and Anthony B.

“There is much more we can do for Andrea Davis, who is one of the patriotic executives. Her name does not get mentioned enough,” Morgan explained to The Sunday Gleaner. “She has worked with so many artistes and stakeholders in the music industry and a lot of the times people have underestimated her strength not just as a woman but as a protector of reggae, a fighter and for what she has contributed and delivered to the genre.”

The musician, singer-songwriter spoke not just from his own experience but of the Morgan Heritage family’s observations and stated that unlike a lot of persons, Davis has “never cheated the music”.

“There are artistes, and other persons, who perform on stage to put the money in their pocket instead of putting it back into their craft and to build the legacy of reggae, but she has always looked at how best we can present our country and genre,” he said. “For me to have this opportunity to celebrate her and tell of her legend and give her flowers now, and believe me, we should give her, her flowers now. She more than deserves it, she over-qualifies.”

Musicologist, producer and lecturer Dr Dennis Howard praised Davis “as a true advocate for the arts” for the various capacities she has served in, “in her desire to promote Jamaican culture”, not only the music but a cultural nation that is heavily focused on the musical forms and the architects behind the country’s popular sounds.

Her work also as a consultant to the cultural and creative industries such as the Jamaica Music Society, Jamaica Intellectual Property Office and the World Intellectual Property Organization have also helped to secure the contributions of the music to Jamaica’s cultural and economic wealth to which Davis’ name is widely called and applauded in conversations about the way International Reggae Day evolved. Inspired by the speech Winnie Mandela made about the power of reggae music to “uplift, inspire and unite” while visiting the island in 1992, Davis embarked on a journey to popularise the genre. Two years later she launched Reggae Day and this eventually evolved into International Reggae Day which, according to New York-based media professional Anthony Turner, is one of her most remarkable achievements.

“She wanted to find a way to unite and uplift people who love reggae and the whole reggae culture for a very long time. Knowing Andrea since the 90s, I was able to see first-hand how she helped to popularise reggae globally. She has done a lot to mother the music and take it to international stages not just large diaspora communities but to places like Honolulu and cultural spaces like Bombay in India, places where people don’t even know that Jamaican music is enjoyed,” Turner said.