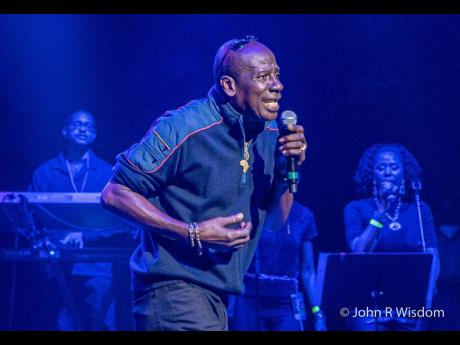 “I am King of Reggae Bassline,” veteran singer Leroy Sibbles proclaimed as he fired up the crowd at the recently held Westchester Reggae Festival at the Capitol Theater in New York. “Every prominent Jamaican singer – past and present – is on a Leroy Sibbles bassline. I create the bassline that bassmen play.”

Sibbles, whose contribution as a bass creator to the collective output and enduring legacy of Studio One is legendary, played rhythms for vocalists Bob Andy, Alton Ellis, Ken Boothe, John Holt, Burning Spear, Dennis Brown, Slim Smith, and scores of others. He was also a pivotal contributor to tracks like Freedom Blues, Love Me Forever, Satta Massaganna; Declaration of Rights, Queen of the Minstrel, Ten to One, Door Peep, and Full up.

Sibbles was in full flight when he borrowed a renowned bass guitar from Derrick Barnett and strummed his first note. This energised the full house. The Studio One music magician could do no wrong as he fired up the crowd and took them on a musical odyssey. His exploits on the guitar proved a high point and much-loved feature of his 45-minute performance that earned him rapturous applause. Prior to that, he reeled off a string of hit songs, including Party Time, Sea Of Love, You Got The Handle, Lost My Baby, Baby Be True, and 54-46 That’s My Number, a well-received tribute to singer Frederick ‘Toots’ Hibbert. He was called back for all of three encores, where he served up Book Of Rule, Sweat and the hugely popular Fattie Fattie.

After a two-year lockdown due to the pandemic, music fans in New York were eager to get their groove on to the timeless classics of Johnny Osbourne, who, along with Marcia Griffiths, headlined the festival and was backed by Derrick Barnett and the Statement band.

The New York-based singer got patrons on their feet, and others danced in the aisles as he meandered through his impressive catalogue of hits, including Come Back Darling, Truth & Rights, Reasons, Jah Promise, Water Pumping, All I Have Is Love, Little Sound Boy, among others. The excitement peaked with Yo-Yo and Ice Cream Love.

After a second encore, he was called back for a presentation of a United States Congressional Proclamation from Congresswoman Yvette D. Clarke. The award was presented by Jamaica’s Consul General in NY, Alsion Roach Wilson.

Reggae Queen Marcia Griffiths, who brought the curtain down, delivered all her big hits. Predictably, she dazzled fans with her sweet, sassy sounds and an impressive catalogue of sing-along hits, including I Shall Sing, Dreamland, Stepping Out Of Babylon, Mellow Mood, Land Of Love, Fire Burning and All My Life done with her son Taffi. She encored with Truly, Live On (dedicated to Bob Andy); the Marley classic Music Gonna Teach, before closing her solo performance with international hit Electric Slide that featured fans dancing on stage. She then invited Leroy and Johnny on stage for You Make Me Feel Brand New, a Stylistics original that was written by Jamaica-born Thom Bell of Philadelphia International Records fame.

Earlier, New York’s Mr Kool got the evening off on a musical high, offering fans Gregory Isaacs classics Number 1, Meet Me At The Corner, Love Overdue and Tune In, which were warmly received.

Another highlight of the four-hour presentation was the appearance of singer Beverley Kelso, one of the founding members of the original Wailers with Bob Marley, Peter Tosh, Bunny Wailer, Junior Braithwaite and Cherry Smith. Kelso was presented with a United States Congressional Proclamation. Kelso has not performed live in decades, but she gave a short, impromptu a cappella performance that earned her applause from the full house.