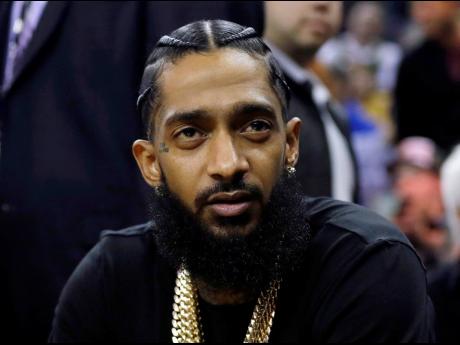 AP
Nipsey Hussle’s friends and fans, and people shot by Eric Holder, the man charged with killing the rapper, have been reluctant to testify.

A judge issued a warrant Thursday for an eyewitness to the shooting death of rapper Nipsey Hussle for failing to appear to testify at the trial of the man charged in the slaying, and, in his absence, a police detective testified on the reluctance of witnesses that has marked the case.

Evan ‘Rimpau’ MacKenzie, a close friend of Hussle’s who was a pallbearer at his funeral and was standing next to him when he was shot, has repeatedly ignored subpoenas ordering him to appear and testify for the prosecution, resulting in Judge H. Clay Jacke II issuing the bench warrant with US$500,000 bail.

“Mr MacKenzie, did he express a reluctance to testify?” Aaron Jansen, attorney for defendant Eric Holder, asked Los Angeles police Detective Cedric Washington, who answered that MacKenzie had said as much in phone conversations.

The taboo against “snitching” has pervaded every part of the trial of Holder, who is charged with first-degree murder in the 2019 death of Hussle and with attempted murder because two bystanders were struck with gunfire.

It was a conversation between Holder and Hussle on the subject – in which Hussle told Holder there were rumours of “paperwork” suggesting he’d been talking to authorities – that prosecutors peg as Holder’s motive for returning minutes later to gun Hussle down.

The shooting took place in a predominately black South Los Angeles neighbourhood where both men and most of the witnesses grew up, and where mistrust of police and courts runs deep. Even Hussle’s friends and fans, and people hit by Holder’s gunfire, have been reluctant to talk in the public venue.