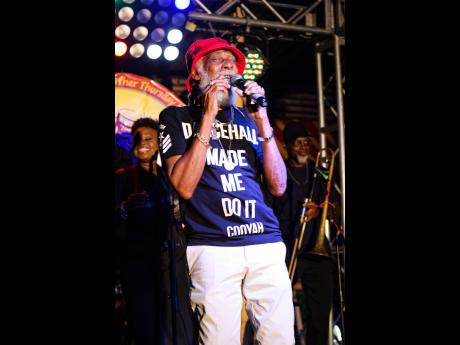 Stephanie Lyew
Having removed his jacket, iconic entertainer Big Youth makes no sweat of holding a note during the heat of his segment. 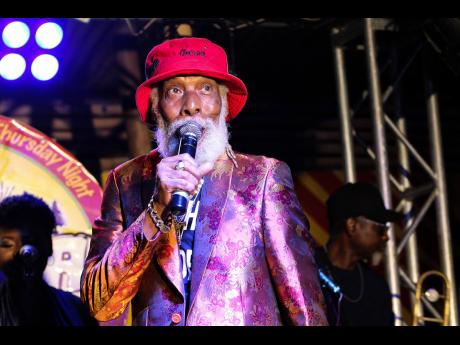 Stephanie Lyew
Big Youth appears pleased as the spotlight is placed on him during Thursday Night Live at Acoustic Inna Di City held at 8 Rivaz at The Cove. 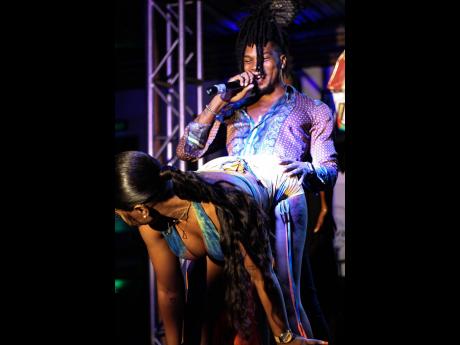 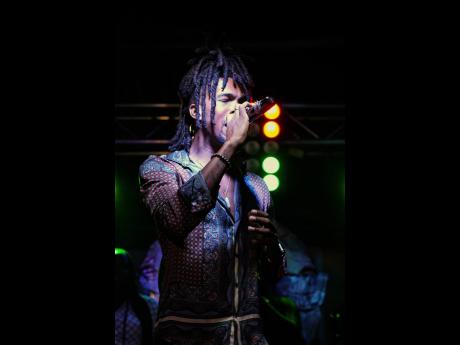 Stephanie Lyew
Dancehall entertainer D’Yani gets lost in ‘Feelings’ as he performs at the acoustic live showcase curated by Thursday Night Live in association with Red Stripe for its Sumfest Edition. 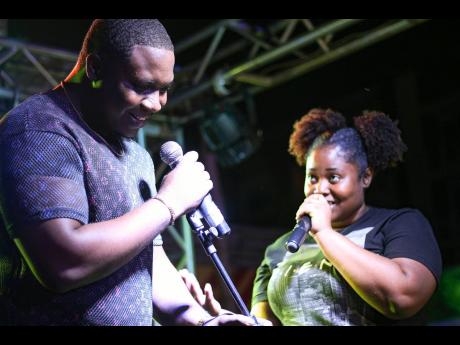 Stephanie Lyew
Emerging artiste Blue IQ braces himself for all the lyrics Anthonia Atkinson was prepared to give during her on-the-spot remix of his song. 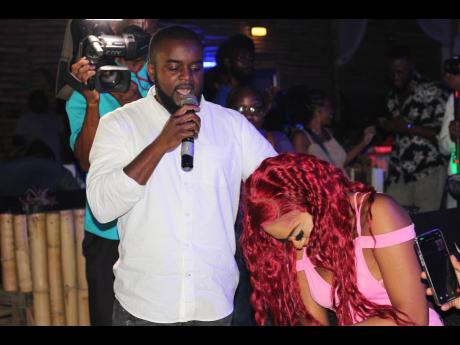 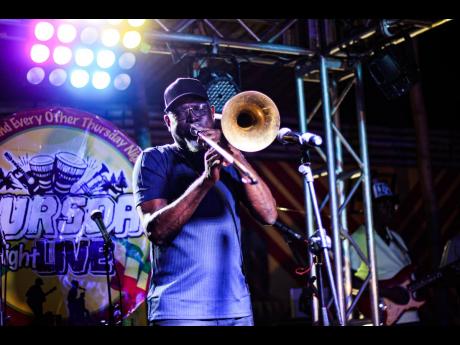 Stephanie Lyew
Romeo the Trombonist played with all his might last Thursday night live at Acoustic Inna Di City held at 8 Rivaz at The Cove.
1
2
3
4
5
6
7

It was go hard or go home for the entertainers that reported for duty at Thursday night’s Acoustic Inna Di City this week for its Sumfest Edition. With headliners like the prince charmer of dancehall D’Yani and the fashionable, smooth ‘skanker’ Big Youth, the ladies in the audience were in for a treat – and that it was – from start to finish. Held bi-weekly at 8 Rivaz at The Cove, the Thursday night series has featured various acts, including Ken Boothe, Dean Fraser, I Waata, Richie Spice and Shane-O, and, like the organisers have done for the previous events, they invited up-and-coming artistes and talented creatives to share the spotlight.

For the third staging, freelance trombonist Romeo Gray Sr emerged, determined to capture the heart of a ‘Juliet’ through his heavy and melodic blows. Singer Blue IQ thought he could match the same energy, but the soft-spoken artiste-in-the-making appeared a little nervous with all the eyes of all the stylishly dressed women in the audience looking at him. The performance took a turn when Anthonia Atkinson, a former Digicel Rising Stars contestant and TV host, decided to challenge him lyrically. Though she commanded the attention for a minute, it motivated him to give it his all.

The next singer would steal the earlier segment of the show. Well-rounded vocalist and musician Andre Shepherd, also known as Enzoh, was beaming with confidence as he started his set, primarily covering hits from different genres, including You Are the Reason by Calum Scott, Cruising Together by Smokey Robinson, and Best Part by Daniel Caesar. At one point, he exited the stage and made his way into the audience to sing to a few ladies, winning smiles and new supporters in the process. After getting over a speechless moment, Natalia Brown said, “This singer definitely has me interested; I would check out his music after tonight.” Aiming to give a taste of what he has got to offer, Enzoh performed one track from his catalogue titled Come Over, which earned applause.

By the headlining hour, it was uncertain if the ladies could manage much more of their hearts palpitating on rapid, but when most rushed up to the front of the stage for D’Yani, it proved they were ready for a healthy serving of the entertainer’s signature vocals. He performed conscious songs Jah Jah Guide Me, Day One and Heaven Telegram first before moving into Feelings. He almost caused a riot when he said he was ending the set, but quickly hinted to the band to cue Senorita for a little more ‘lyricsing’.

“I definitely had fun tonight, and I give thanks for the reception from the ladies. It’s been a while since I did an acoustic performance, and though short notice, rehearsals were good, and it’s definitely helping me to practise,” said D’Yani, who is expected to appear on the Reggae Sumfest stage on July 23. “There’s lots of work going into Sumfest preparation and the set, so persons can just expect this vibe times 100 or more. I can’t give everything away, but it will be just as entertaining.”

The closing act, reggae-dancehall icon Big Youth, whose given name is Augustus Buchanan, put on his dancing shoes for his performance, styled to perfection as per usual. Though by the time he entered stage left many of the younger patrons had their fill of fun, it didn’t stop him from putting on the moves. He delivered a complete set, with non-stop skanking from one end of the stage to the next, which, with his injections of lyrical consciousness and openly sharing his views on the social ills he has witnessed over the years until the present day, made it all the more compelling. Some of the favourites from Big Youth’s set were I Pray Thee, S90 Skank and A Luta Continua (Struggles Continue). When the show was over, he made it clear with a performance of Hit The Road Jack.

Other highlights from the evening included Cooyah giveaways; beer buckets deals from the official sponsor of the live showcase, Red Stripe, which gave patrons a chance to win tickets for Reggae Sumfest and dance challenges from the hosts Shannon-Dale Reid and popular radio host Raven. They welcomed Tyreke Dirtt to the stage to demonstrate how the dirt dance move was done.

With another successful staging under their belt, Latoya McKay shared that it was important for the series to pull on young and veteran acts.

“Our mission is to create a cultural balance that connects both eras from the ’80s to MMXII (2022), with the infusion of music, food, fashion, crafts, and dance. The vision is to create a ’Dub Club’ on steroids, not on the hill but in the city,” said the co-founder.