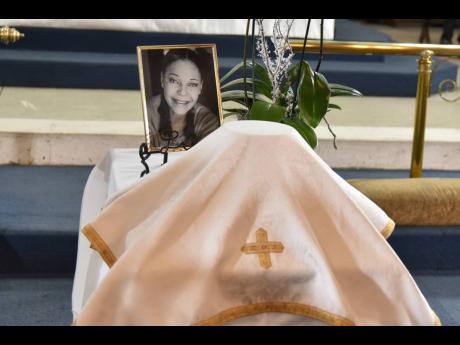 Family, extended family and well-wishers gathered at St Margaret’s Church in Liguanea on Thursday for a royal send-off for Leonie Evadne Forbes, a woman who was honoured as “first and foremost a queen … full stop”.

There seemed to be hardly enough words in the dictionary to describe the excellence embodied in actress, producer, writer, broadcaster and icon, Leonie Forbes. She was the queen who was “extraordinarily gracious, extraordinarily generous and extraordinarily delightful”, as well as a team player and a mentor.

Reading a tribute written by playwright Basil Dawkins, Alwyn Scott noted that Forbes, who was the “promulgator of excellence”, had the stage, big screen and television as her “territories of first choice … and brought magnificence, dignity and respect for the craft”.

He added, “Her absolute minimum standard was excellence without apology.”

Her good friend, Fae Ellington, shared that Forbes was a “seer” who often had dreams and visions. “She had visions from she was seven”, Ellington noted, and this tied in perfectly with what the congregation had been told earlier by Dawkins via Scott.

He shared a story of late actor Volier Johnson’s determination to “test” Leonie on stage by deliberately turning in a poor performance. But, alas, once Volier took to the stage with Leonie, he ended up turning in what was arguably one of his best performances. He tried it again, only for the same thing to happen.

Volier came to realise that “She have powers, Poo … after the experiment backfire, mi just work wid her.”

Examples of her kindness abounded - she took in the then Beverley Anderson to live with her for a while. She then got a job for her years later when she was no longer married and was “unemployable” because she was too educated.

In what she said was a personal tribute, Beverley Duncan, whose mother and Forbes’ mother were good friends, noted that it was her “pleasure to be asked to be one of those who paid tribute to this fantastic woman”.

“Her life of service was such that whoever she touched felt that touch in such a way that they wanted to be like her. If she saw something in you … as she did in me ... she nurtured it. She never let it alone.”

Duncan then shared that Forbes’ influence on her own life saw her following a similar path, perhaps subconsciously, as she, too, went into broadcasting and theatre and is also an author.

Forbes, the mother of four, two of whom predeceased her, was remembered as the mother who was more concerned with the comments on her children’s report cards than the grade in various subjects, and was eulogised as that actress whose “total being was a well-tuned instrument”.

“When Leonie inhabits a character, she takes you on a mesmeric and enchanting journey,” Ellington said.

Commenting on her “incredible attention to detail”, she shared that “[Leonie] needed the correct button to be used on a period costume”.

Her crocheting skills were also highlighted, and those who didn’t know were informed that Forbes crocheted wedding dresses, bikinis, shoes, bedspreads, christening gowns, doilies, shawls and even a piece for St Margaret’s altar table. Drawing an analogy, Ellington stated, “Like the crochet pieces with their beautiful patterns, designs and textures that she stitched together with their intricate details, she started her life with a single stitch and went about weaving together family, friends, colleagues, strangers, leaving each of us our own memories, feelings, dreams and personal experiences ... . What an artist she has been! Let us celebrate her life. Walk good, Leonie, and may good duppy walk wid yuh.”

Rev Dr Ralph Hoyte, who delivered the sermon, also impressed upon the congregation that they were all there to celebrate, not mourn, and Minister of Culture Olivia Grange, while she did not address the congregation, was present for the thanksgiving service.

The dignified celebration had a musical overtone and folksy pieces made joyful with tambourines, as well as spiritual songs drenched with pathos filled inside the church. I Don’t Want you to Weep After Me, Daniel’s God Surely Will Deliver, What a Wonderful Thing, Someday I’ll Go Where Jesus Is, Journey Man Jesus were among the numbers from the National Chorale of Jamaica. Soloist Carole Reid also paid tribute, and so, too, did Paulette Bellamy on violin with Fly Away Home.

Leonie Forbes passed away on October 25 at the University Hospital of the West Indies in St Andrew.