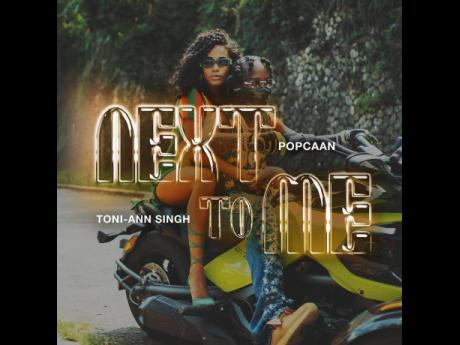 Track art for 'Next to Me' by Toni-Ann Singh and Popcaan.

Miss World 2019 Toni-Ann Singh and dancehall artiste Popcaan are set to release a single together.

The track, Next to Me, is set for release on Wednesday, November 30, a post of the single's cover art on Singh and Popcaan's social media indicated.

The post shows Popcaan and Singh on a motorbike, with Singh wearing heels, a sexy pillion.

Singh's outstanding vocals were first heard during the talent segment of the local Miss Jamaica World pageant. She would go on to win the Miss World fast-track talent competition, effortlessly covering Whitney Houston.

In fact, following Singh's performance on the Miss World Stage, Mike Jackson, musical director of the movie, The Bodyguard, who was among the audience, said: "I think we've just seen a star in the making. We've been blessed this year with so many beautiful singers, and dancers, and other acts. But we had to make a decision with the talent, and we had to give it to Jamaica. I Have Nothing sung so beautifully and so differently from Whitney, too, which makes it extra special."

During her reign, Singh released a cover of I Have Nothing in December 2019, proceeds from which benefited Beauty with a Purpose, the charitable arm of the Miss World Organization.

Though she has not yet released an original song, she has been the subject of others, notably Jamaica Miss World by Ganggoolie and Burna Boy's Toni-Ann Singh ( TAS ), which features Popcaan and appears on Burna Boy's Love, Damini album.