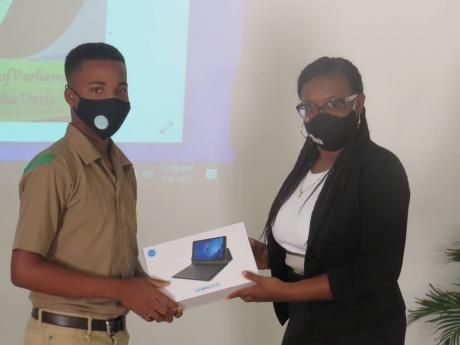 Hanover Western Member of Parliament Tamika Davis (right) hands over a tablet to a student during a donation ceremony at Global Villa in Lucea, Hanover.

Having defied the odds in wrestling the Hanover Western constituency seat from the People’s National Party’s (PNP) three-term Member of Parliament Ian Hayles, first-timer, the Jamaica Labour Party’s (JLP) standard-bearer, attorney-at-law Tamika Davis, says she is totally committed to bringing the type of representation she hopes will drive development in her home parish.

Davis, who was born and raised in the district of Middlesex, one of the many small rural farming communities in the hills of western Hanover, has experienced first-hand, from her childhood days, the struggles of residents trying to survive and prosper under challenging social issues such as bad roads, a lack of running water and the absence of streetlights among others.

Having watched the many years of stagnation, Davis decided that watching from the sidelines was no longer an option for her, so she decided to challenge Hayles, who she felt that despite serving three consecutive terms as MP, was not cutting it.

Coming away victorious, Davis believes her new platform as Member of Parliament has allowed her to put in the work needed to transform the constituency and improve the quality of life of the people through proper representation.

“Over the last 10 to 15 years, all the other parishes have developed in some way or the other, and somehow Hanover is left behind. We (in Hanover) are still struggling with problems that have plagued us since I was a child,” said Davis.

Davis to lean on education for development

The first-time MP has seen the transformative value in education and so, in her bid to put Hanover on par with other parishes, has decided to put education at the top of the list of things she plans to give priority.

“I am going to be very honest and very unapologetic too when I say that my focus is on education because we are in the new norm and the on-line education is where we are,” said Davis. “I want to address the Internet connectivity issue across Hanover Western, in particular, and the parish in general,” she said.

Davis is also planning to develop several education-centred projects, which she hopes will create greater scope for the advancement of students across the parish, who in many cases have been left behind through no fault of their own.

“Having travelled, you leave the parish, you go to different schools and you see things happening elsewhere, and the question is always, why not Hanover?” said Davis, in explaining her zeal to use education as a tool of transformation.

With elections now out of the way and having been given a clear mandate, Davis said she would have liked to hit the ground running, but the COVID-19 pandemic had rendered her a caged lion with many of her ambitious plans to start transforming the lives of her constituents on pause.

“The only thing that is perhaps thwarting my efforts right now is the onset of the pandemic COVID-19, so though I am still raring and eager to go, I am guided by what is prevailing in the country,” said Davis.

“Another ripple effect of the pandemic is the unavailability of government resources, coupled with the fact that the elections took place in the middle of the financial year,” she said.

Davis, who describes herself as a realist, says she will be aiming to set reasonable timelines to achieve her goals, bearing in mind that the conditions under which these must be achieved are beyond her control.

“People are looking to me for change, they know that they will not be disappointed because I have a vested interest in the parish, it is personal, and quite apart from representing the Jamaica Labour Party, I want Hanover Western’s flag to fly high,” said Davis.

“I intend to give the representation for this constituency my best effort. I will have an open-door policy to all, irrespective of political affiliation."

Already, Davis has been meeting with stakeholders to develop projects, which she hopes will be implemented post-COVID or as soon as the opportunity arises because she is already looking forward to the day when, unlike in her time as a child, the youngsters in the rural communities in her constituency will, not only have access to Internet services but will also have decent roads, water in their pipes and streetlights to facilitate night-time activities.

“As a young student going to Rusea’s High School, I wanted to do extra lessons, but not having streetlights in my community seriously affected my ability to stay later,” said Davis, who was bitten by the political bug out of that experience.

“I wrote a letter to the then Hanover Parish Council about the lack of streetlights in Middlesex and there was a favourable response from that body towards the letter, resulting in streetlights being erected in my community.”