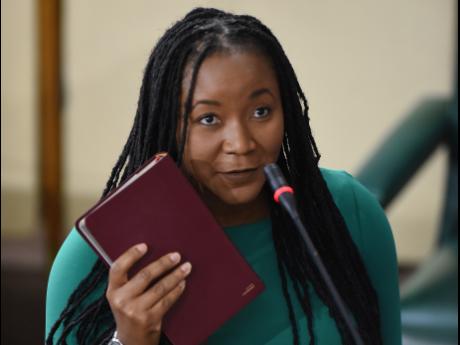 To say young attorney-at-law Tova Hamilton emerged a giant killer in the September 3, 2020, general election, would be an understatement.

Interestingly, for the 37-year-old first-timer to representational politics, Hamilton’s decision to attempt the so-called impossible was a case of responding to the people’s call for proper representation and to address decades of political neglect rather than any innate hunger to secure a seat in Gordon House.

“The people chose me to be their servant. I have been involved in some amount of philanthropy in the space, and I experienced first-hand the needs of the people. What was glaring was the lack of representation. I believe my philanthropy was instrumental in piquing my political interest, and it acted as a crutch in my transition into representational politics,” explained Hamilton, who was born in St James but grew up in Trelawny.

“Additionally, I was trained to advocate for the rights of people, and it only made sense for me to use my training to assist the people who helped to shape me into the person I am today. I believe I have a duty to provide that type of servant leadership to the people,” added Hamilton.

Having earned the trust and support of the people, Hamilton, whose education spans William Knibb High School, Westwood High School (Trelawny), the University of the West Indies Cave Hill Campus (Barbados) and the Norman Manley Law School (Kingston), has identified of number of projects, she hopes will serve as the launching pad for her ambitious bid to bring development to her constituency.

“It is said that the road to development begins with a road, and for some time now, the people of Trelawny Northern have been crying out for improvement to the road network, and for consistent water supply. I believe all other improvements will flow naturally from these developments,” said Hamilton, outlining her immediate priorities.

“The youth are also in need of urgent attention, and they require critical engagement. They feel muzzled and ignored, and I believe right up there with the priority plans, must be job creation, arising especially from the impact of COVID-19. Other major areas of concern include the lack of community development, the lack of proper education and training, garbage collection, insufficiency of streetlights, limited MSME support, unreliable data and telephone services, low levels of agricultural support, and housing,” said Hamilton, in explaining her overall plans for Trelawny Northern.

With government funds likely to be focused on recovering from economic fallout spurred on by the spread of COVID-19, Hamilton is hoping to use her powers of persuasion to create private-sector partnerships for select projects.

“I am in the process of exploring the possibility of financing for some projects. I am aware that the government will not be able to finance all the projects, and so I will employ some amount of creativity in sourcing alternative financing by partnering with as many persons and institutions as possible to get the job done,” explained Hamilton.

"The private sector will play a critical role in the development of Trelawny Northern and I must use this opportunity to commend those private-sector entities that have already committed to supporting my effort. I believe they are rock stars,” said Hamilton.

Cognisant of the fact that it will take an educated workforce to achieve the kind of development she wants to see in short order, Hamilton plans to invest heavily in the training of the youth in her constituency so that they will be able to grasp opportunities when they become available.

“There will be a targeted approach to training because I want our young people to be ready for the opportunities that we will bring to the constituency. I want them to have the necessary qualifications and the capacity to benefit significantly. Without saying too much, there are a number of initiatives that I am currently exploring to alleviate the issue of unemployment, especially among the youth cohort. I will seek to do some pilot projects, initially to develop proof of concept for a greater plan that is to come,” explained Hamilton.

Based on the work, preparatory and otherwise, she has done since she was elected member of parliament, it would appear Hamilton has hit the ground running, putting her in position to see some early returns.

“I am actually using this period to acclimatise to this new office, so I can fully understand the ins and outs of how things work. But my lobbying has already begun for intervention in a number of these areas of concern. I am really used to the planning of projects and successfully executing them within a specified time frame, but I know that now I have to conform with the bureaucracy of government,” noted Hamilton.

Time against newcomers to prove their worth

Realising that her performance will ultimately determine her longevity in politics and fully aware that, initially, she will have just a short five years to prove her worth, Hamilton is hoping to do enough to keep her constituents in her corner.

“Five years is definitely not enough to resolve 31 years’ worth of neglect, but I am committed to the task, and can only hope that the people of Trelawny Northern are just as committed. I speak and advocate for them, and it is they who will determine how long I will be allowed to be in their service,” said Hamilton.