Over-active lion gets the snip for having too many cubs 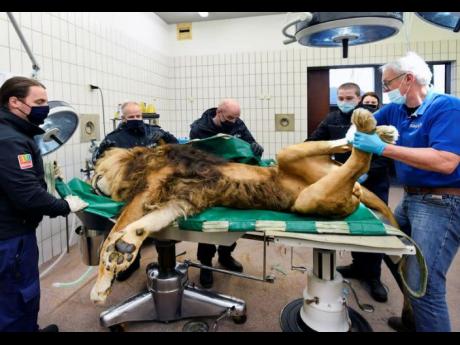 A lion has been given a vasectomy after fathering five cubs last year.

Thor the lion impregnated two females at the Royal Burgers' Zoo in the Netherlands, with the first having twins and the second giving birth to triplets but keepers are worried that he will cause overpopulation.

The chief vet at the zoo said: "Why are we doing it? Because he's a proven breeder."

Henk Luten performed the procedure and explained that the zoo has now had enough of the lion's DNA.

He explained: "We have a lot of offspring and we don't want to have him overpopulating the genetic pool."

Vasectomies on lions are rare and Luten said it was the first time he had performed the snip on one of the animals in more than three decades of working at the zoo.

He said: "It's the first time in the 35 years that I've been a veterinarian here that I have done this operation on lions."