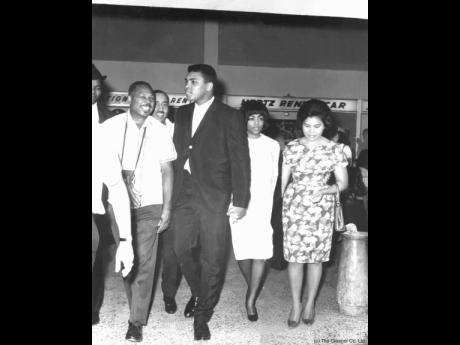 In 1965 Heavyweight Champion of the World Cassius Clay, Mohammed Ali, visited Jamaica. Clay was getting ready for his second fight with the man he defeated for the title, Sonny Liston, but he took the time out to woo a few more Jamaican fans than he came to the island with.

WILL TAKE LISTON IN 4, SAYS CLAY ON ARRIVAL

A fair-sized crowd of boxing fans who turned up at the Palisadoes Airport yesterday afternoon got just what they expected from the heavyweight champion of the world Cassius Clay with the prediction that he will take "the Big Bear" Sonny Liston in four rounds when they meet in their return on March 25.

The well-dressed 23-year-old champion was full of talk and had a busy time signing autograph books (he signs Mohammed Ali) immediately after he arrived. He was accompanied by his wife Sonji and his trainer Drew "Bundini" Brown, who was also a trainer of Sugar Ray Robinson, for six years.

What seemed to surprise the onlookers most was Cassius' not claiming to be "the greatest." As soon as he arrived he embraced Sugar Ray, whom he will second tonight, turned to the crowd and declared: "This is the greatest fighter ever: I pattern all my boxing from him

Later when Archie Moore appeared he seemed overjoyed. "You are looking at three of the greatest boxers the world has ever seen," he said. "Not only the greatest but also the prettiest too," he added.

In an interview with the "Gleaner" about his return with Liston, Cass says that "The Big Bear' will never ever beat him and made his fourth-round prediction. After his fight with Liston he says he will be taking on Floyd Patterson.

In Cassius' estimation there seems to be little hope of Liston regaining the heavyweight title for Cass has everything set; his brother Rudolph aVlentino Clay will be the next champion Cassius says.

Cassius' trainer is just as confident as he is that he will keep the heavyweight crown for quite a long time.

"I train only champions," he said. "I was with Sugar when he was champion and now I am with Cassius, the champion."

Bundini says that the champion has completely recovered from his hernia operation and will be in top shape for his return with Liston. Clay now weighs 228.

Dressed in a dark blue suit, white shirt and cream tie, Clay carried on signing autograph books, and holding the interest of the crowd with his talking.

Already Cassius seems to have made an impression on the public, for when he was signalled by Lucien Chen that it was time to leave one pleading spectator begged: "Don't take him away yet."

He will get another chance to see the champion at 8.30 tonight at the National Stadium. Clay will be staying at the Casa Monte Hotel and is scheduled to leave the island on Monday.