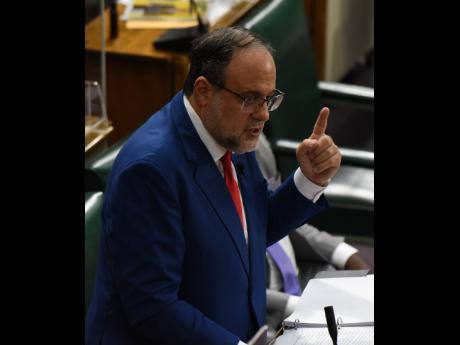 Shadow minister of finance, Mark Golding, is suggesting Jamaica turns to farming as a means to counteract the economic hole it has been put in by COVID-19. But COVID-19 has never faced a foe quite like … Ganja.

Pointing out that many sectors in the economy have been reeling from the pressures of the COVID-19 pandemic, Opposition Leader Mark Golding has pitched that is it the right time to light up the marijuana industry to boost the recovery process.

Golding knocked the Government hard for presenting a “timid” and “inadequate” Budget as he renewed calls for more spending.

The Government, he said, was still pursuing conservative fiscal policies when the country was desperately in need.

“This Budget does not do right for the Jamaican people, especially the poor, those earning low wages, the unemployed and the elders struggling to survive on a meagre pension that has not increased since 2018,” Golding told Parliament Tuesday.

But he said that through the marijuana industry, the Government could help to tame the massive economic fallout that is expected as a result of the COVID-19 pandemic.

“This industry can assist in the economic recovery of Jamaica, providing much-needed foreign exchange and creating employment,” Golding declared.

Golding said amendments to the Dangerous Drugs Acts in 2015 have created a platform on which the medical cannabis industry can grow.

“It is now time to go further,” Golding urged.

He, however, did not say what potential revenue impact could be expected, and neither did he say how or what international legal manoeuvres would be required.

But the opposition leader said the next PNP administration would overhaul the industry.

According to Golding, small farmers are being shut out of the industry and his reforms would reduce barriers to entry for them.

He also said the PNP would embolden households to cash in on the five weeds they can plant under the law for medicinal and therapeutic use.

“We would empower householders to monetise this benefit by allowing them to sell their ganja to licensed processors and retailers, creating an important new economic opportunity to supplement the income of Jamaican households,” Golding said.