Barbara Gloudon, the name behind pantomime and the carrier of our creative history 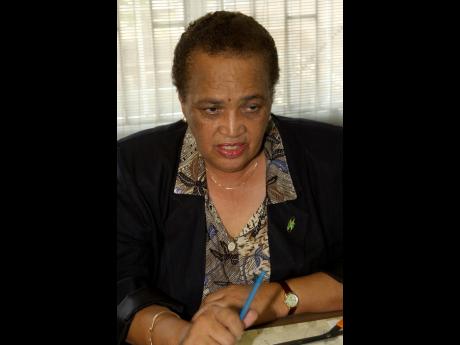 She was one of the most distinguishable radio personalities in Jamaica. One just has to mention the phrase ‘Hotline’ and immediately, Barbara Gloudon’s name comes to mind.

Gloudon has worn many hats throughout her illustrious career, including that of journalist, scriptwriter, playwright and author.

Born in Malvern, St Elizabeth to a middle-class family, Doris (née Harvey) and Vivian M. Goodison, Gloudon attended St George's Elementary School and went on to further her education at St Andrew High School for Girls in Kingston, as well as completing an international writing studies program at the University of Iowa.

While in high school, she participated in theatrical performances and studied drama with Jean Watson.

Later, after a distinguished career as a journalist, where she was honoured with two Seprod Awards from the Press Association of Jamaica and the Order of Distinction, that experience with Watson paid off as Gloudon began working as a scriptwriter for the Little Theatre Movement (LTM) and writing radio drama.

She hosted a radio talk show for 30 years and became chair of the LTM. Having received numerous awards and honours, Gloudon was bestowed with the Order of Jamaica in 1992 and in 2012 became a fellow of the Institute of Jamaica.

All the way back in 1953, Goodison began her career at The Gleaner newspaper, working as a reporter. Simultaneously, she worked as a columnist, using the pseudonym “Stella” at the Jamaica Star.

On the 23rd of April 1960, Goodison married the chemist and food technologist, Ancile Gloudon a native of Port of Spain, Trinidad. Barbara then went on to work as a features editor and reporter at both The Gleaner and The Star until 1978. In 1964, the inaugural year of the Seprod Awards for Journalism, and again in 1968, Gloudon won recognition from the Press Association of Jamaica.

One of the regular beats she covered was arts and theatre. Showing a particular talent for reporting on the cast, as well as the event, Gloudon was invited by the government to cover the art revolution in Britain in the 1960s.

Upon her return to Jamaica, after nearly a month in the UK in 1969, Gloudon was invited by Greta Fowler, who with her husband Henry had founded Jamaica's Little Theatre Movement (LTM), to write a script for the annual pantomime production.

Selected for production, the piece marked a turning point in the LTM productions, as, before Moonshine Anancy, pantomimes were more British than Jamaican.

Leaving journalism in 1978, Gloudon worked until 1981 as the director of the Jamaica Tourist Board and then opened her public relations firm. From the late 1980s, she hosted a radio talk show, Hotline, broadcast by Radio Jamaica Rediffusion.

Gloudon was inducted into the Jamaican Press Association Hall of Fame in 2013 and continues to write as a journalist for The Jamaica Observer in addition to her role at the LTM.