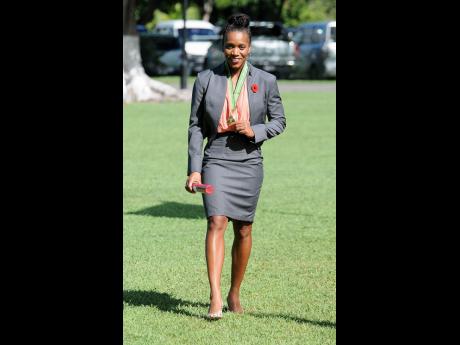 File
Alia Atkinson walks back after being awarded the Order of Distinction in the rank of commander at the Presentation of National Honours and Awards held at King's House on October 15th,2018.

She has been hailed as the darling of the pool in Jamaica and will surely go down as one of the country's most iconic sporting figures.

Her iconic status was cemented in 2014 when Atkinson became the first black woman to hold a world record, having tied the short course record in the 100-metre breaststroke in Doha, Qatar, hitting the wall in 1:02.36 seconds. She would equal the feat two years later in Cartres, France.

Alia Atkinson, the multi-Olympian breaststroke specialist, was born on December 11, 1988 and competed in her first Olympics at just 16 years old, making her fourth Olympics in 2016.

But Atkinson’s role as a Jamaican swimming isn’t just about performances and she understands this in no uncertain terms.

Atkinson believes strongly that much of her roles has to do with, not her performances, but how those performances and the way she lives her life, the dedication she puts into her craft, can lead the generation following her along a similar path.

"To place Jamaica on the world map of swimming; to agitate for the improvement of the infrastructural support for swimming in Jamaica to be able to take it to the next level; and to realise my full potential for me, my parents, and my country,” is the mantra she has taken on.

One of Atkinson’s first major international championships happened to be the 2004 Olympic Games in Athens. At just 15 years old, Atkinson didn’t qualify for a semi-final or championship. Four years later she once again was selected to Jamaica’s Olympic Team in 2008, this time for the 200-meter breaststroke. The breaststroke specialist finished 25th overall in 2008.

In 2012, with two Olympic Games under her belt, Atkinson focused on the 100-meter breast. Coming out of the semi-finals, she was tied for eighth with Canadian Tera van Beilen. The two swam off for a place in the final, with Atkinson copping the last spot in the championship final. In the outside lane, Atkinson had an impressive swim where she just missed the medal podium with a fourth-place finish.

She would then later go on to compete in the second cluster of the world cup stops, including meets in Eindhoven and Budapest. In Budapest, on the last night of the competition, Alia broke the 50 breasts (Short Course) world record, lowering her mark by .08 from 28.64 to 28.56.

In 2018 Atkinson finally pulled off the sprint breaststroke World Cup crown, winning both the 50 (29.05) and 100 breaststrokes. Alia Atkinson continued to carry the torch for Caribbean and Central American women. The most successful female swimmer in the region’s history, Atkinson added 2 more World Championship gold medals and a bronze to her haul in 2018, making her SwimSwam’s 2018 CAC Swimmer of the Year.

As if her streak of outstanding performances and successes in the pool weren’t enough, for the 5th time in the 6-year history of the award, Atkinson was named the 2019 Swammy Awards Central American & Caribbean Female Athlete of the Year.

Most recently, Atkinson has had successes for the London Roar during the 2020 International Swimming League (ISL) season and was the third MVP for match five, following her 50 breaststroke skins victory.

For her performances in the ISL, Atkinson was awarded her 3rd consecutive (and 6th overall) Central American & Caribbean Female of the Year Swammy award.