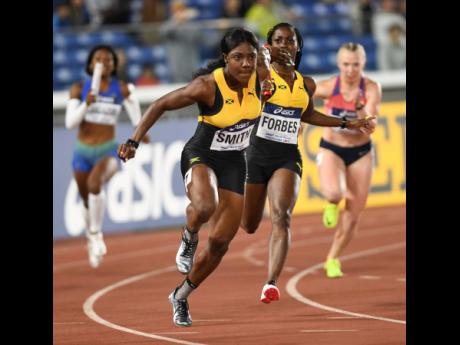 File
Jonielle Smith (left) receives the baton from Shashalee Forbes in the women’s 4x100 metre relay heats at the IAAF World Relays in Yokohama, Japan in 2019.

The news that Jamaica will not take part in this year’s staging of the World Athletics Relays came as a shock. Or maybe not so much. The truth is the COVID-19 pandemic has destroyed much of the countries sports and this is just the latest example. Now the race is on to get Jamaica’s relay teams qualified for the Olympic Games in Tokyo later this year.

No World Relays for Jamaica

JAMAICA WILL not participate in the fifth staging of the World Athletics Relays, which is scheduled for Charzow, Poland, between May 1 and 2.

The development was confirmed by the Jamaica Athletics Administrative Association (JAAA), which pointed out through a press release that they had to pull the plug on their involvement in the relay carnival due to travel restrictions.

“Based on existing travel restrictions, routing and possibilities since then, caused by the SARS COVID-19 pandemic, it has become extremely challenging for the Jamaica team and officials to participate,” read the JAAA release.

“In the interest of our athletes and stakeholders, we have decided to withdraw from the event.”

With several of the country’s top athletes not making themselves available for selection, the JAAA had named a weakened team, which caused some concern among local track and field fans. There was particular concern with the men’s 4x100m relay team, which is yet to qualify for the Olympics.

OTHER COUNTRIES DECLINED TO PARTICIPATE

With the daily rise of COVID-19 cases in Poland, other top nations like the United States (US) and Australia had earlier indicated that they would not be attending the meet.

Jamaica and the US are the two most successful countries at the World Relays. The US has amassed 31 medals - 22 gold, 7 silver and 2 bronze, while Jamaica has won 19 medals, 5 gold, 8 silver and 6 bronze.