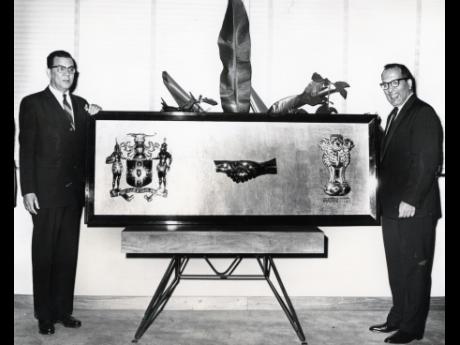 India’s gift of vaccines to Jamaica should not have been surprising, since the countries pledged friendship with each other as far back as 1966. Even before that, the link between India and Jamaica, with indentured labourers coming to the island after emancipation in 1838, making Indians, one of the earliest citizens of an ethnically diverse country.

The gift is a magnificent plague with a symbolism of friendship in sterling silver. It measures some 7 by 24 with a border of polished teak, a bed of beaten silver and sterling silver symbols mounted on the bed. The symbols are The Jamaican Coat Of Arms at right, two clasped hands in the centre and the Indian National Symbol at left. The Jamaican motto “Out of Many One People is of course incorporated in the Jamaican Coat of Arms and Indian motto in Indian script appears with the Indian National Symbol. In English it says “Truth Always Succeeds”.

In the making the presentation to the Hon Donald Sangster, acting Prime Minister and Minister of External Affairs. Leader of the House of Representatives, Mr. Muni Lal said that the gift should have been presented as a “birthday” gift; unfortunately this had been delayed, but he was happy now to present it as a “coming of age” gift in view of the great progress Jamaica has made both internally and in the field of international relationships since independence.

And Mr. Sangster was pleased to accept the gift on behalf of the people of Jamaica “as a symbol of the friendship of our two countries”.

The ceremony took place in the Members lobby of Gordon House immediately after the House of Representatives had recessed for dinner at 5:20 o clock. The occasion was treated as a joint Parliamentary meeting and the President and other Members of the Senate were present. Mr. Lal was accompanied to the Chambers by Mr. Ivo DeSouza, Chief of Protocol.

Mr. Lal was welcomed by the President of the Senate. Senator, the Hon Fredrick Duhaney, who told the High Commissioner that it was his proud privilege to do so. He went on to say that the presentation of the plague was indeed a symbol of the friendship of Jamaica and India. Dr. Duhaney said that there were many people in Jamaica who had originated in India who were now part of the Jamaican way of life, helping to uphold our motto: “Out of many one people”

From time immemorial it has been the custom to give gifts to mark friendship. Dr. Duhaney said, and it was with this feeling that members of Jamaica’s Parliament had gathered to receive this gift on behalf of Jamaica’s people.

“I am naturally happy that the performance of this pleasant duty falls on me. A token of our high esteem and regard for your country, this symbolic gift reflects the oneness of purposes and procedures which unites our two people. The cordiality of relations between Jamaica and India has been based right from the beginning on the sympathetic understanding of each other's problems, plans and perspectives.”

“The handshake which this plaque highlights bespeaks of the determination of my government to leave nothing undone to further improve and strengthen the existing friendly relations between our two nations”.

“It has been my high privilege to represent my country in Jamaica for the last nearly two years”.

India has passed through some difficult challenging situations during this period.

Faced with problems threatening the fundamentals of our beliefs and ideals, the people of India unites as never before, strove their utmost to preserve the high values inscribed in their constitution. The moral and material support we received from the like-minded peoples the world over sustained us in our struggles.

We are beholden to our friends and are determined to march forward hand-in-hand with them, for the realization of our goals.

“We in India, Mr. President lay great store by the will of our people, also by the will of the free countries of the world as reflected in the United Nation. We also value greatly the high purposes of the Commonwealth, an organization unique in structure and stature. We have implicated faith in the dignity and goodness of man and have pledged ourselves never to be a party to the spark of human self-respect being blown out”.

We share these resolves and motivation with Jamaican and all other countries in and outside the commonwealth which have chosen the path of democracy for the achievement of their political and economical goals.

“I am regretfully conscious of the long delay that has occurred in making this presentation. This was intended to be a birthday present. During the last five years, your independence has gained much depth and significance. Not only had independent Jamaica made remarkable economic advances, it has also made impressive contributions to world thinking on complex political issues. This plaque can now be regarded as the coming-of-age present”.

“As a developing company we share with you many problems and many objectives. The seas that divide our two countries evaporate into thin air when viewed against the back-drop of joint efforts to resolve common difficulties”.  The rapidly diminishing distances have brought the one world Government ideal nearer to achievement.

“With positive approaches to capitalize on the divinity in man, we have reasons to be hopeful for the future. May this plaque serve as a reminder to the present and future generations of Jamaicans of the virtues of a handshake unmindful, may completely oblivious of the geographical, racial and religious divergences”.

“With these few words, may I on behalf of the Government and people of India request the acceptance of this plague – which is to be hung in Jamaica’s House of Parliament – as a token of the unity of our two peoples and also as a symbol of the largest unity of brotherhood of Man”.

“I desire on behalf of the Government and the people of Jamaica to express our heart-felt thanks for the lovely gift from the government and people of India and which is given in honour of Jamaica’s attainments of independence in 1962”.

“May I ask you, Your Excellency, to convey to your Prime Minister, Mrs. Gandhi and the people of India the appreciation of all Jamaicans for this plaque which will be hung in position a position of honour in Our Parliament Building”.

“This plaque will long serve to remind us of the high esteem in which we are held by the people of India and the friendly relationships which have existed between our two countries for many years. Quite appropriately the plaque carries the symbolic handshake of co-operation with the national emblems of our two counties on either side”.

“Jamaica and India, as I remembered earlier, have had long and meaningful ties particularly in the educational field where regular scholarships are given by your government to Jamaicans for studying in your country. We value this relationship very highly and we are very grateful for the assistance given in this and other directions”.

“But the ties go even further than that. I refer to the fact that many persons came here from India to work and like many other groups of persons who migrated, have made this island their home, have integrated their culture and spiritual values in Jamaican life, and are making a valuable contribution to the political, social and economic development of the country”.

“Your country which gained its independence many years ago has adhered to the principles of neutrality in her international relationships and has been playing a leading role in the effort to establish peaceful co-existence amongst the nations of the world.

In doing so, she has set an example for newly independent countries such as Jamaica and other countries about to become independent”.

“Jamaica is proud to be associated with your great country; not only in the fraternity of the Commonwealth but also in the United Nations where the wise counsels of India are very highly respected”.

“You will observe that this plaque will be placed in our parliament building not only as a symbol of the friendship of our two countries but as a mark of the commonwealth deal of adherence to parliamentary democracy.

“Once again, Your Excellency, on behalf of the Government and people of Jamaica accept our sincere thanks for this gift which will be cherished for generation to come and the occasion has been made most happy by the fact that you have been the person who has brought this gift with you”.

The Speaker of the House, the Hon. Tacius Golding, then returned thanks to the Indian high Commissioner. He said that it was a pleasure to extend to Mr. Muni Lal “our sincere thanks” for delivering the plaque to Jamaican Parliament “in our time and generation”.

There had always been close historic ties between India and Jamaica, Mr. Speaker said, and Jamaica on the whole had followed the fortune of Indians and the work of the great leaders, the Mahatma Gandhi, Jawaharlal Nehru and the more recent Prime Minister of India with admiration and with understanding.

Mr. Speaker spoke of the Indian contribution to the economic, political and social progress of Jamaica but pointed out that they had worked in this country as Jamaicans and not as Indians.

The plaque, said Mr. Speaker, would symbolize forever the close historic ties of the two nations and the friendship of their people. He hoped for Mr. Lal a pleasant stay in Jamaica.

After the presentation refreshments were served and Mr. Lal had an audience with the acting Prime Minister in his Parliamentary Office with Mr. Ivo DeSouza in attendance.