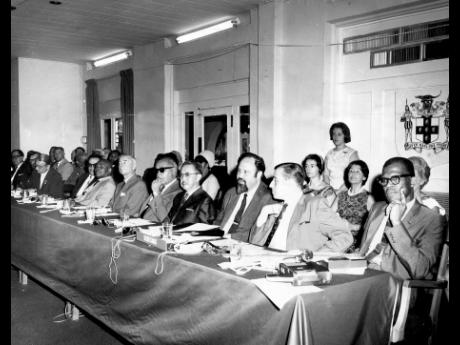 File
Delegates attending the United Nations Seminar on Human Rights as they appeared at the opening ceremony at the Myrtle Bank Hotel on April 25, 1967. The seminar was officially opened by Jamaica's Prime Minister and Minister of External Affairs, the Hon. Hugh Shearer, who said the most important factor in securing Human Rights was the means which each country applied and adopted to make those rights effective. 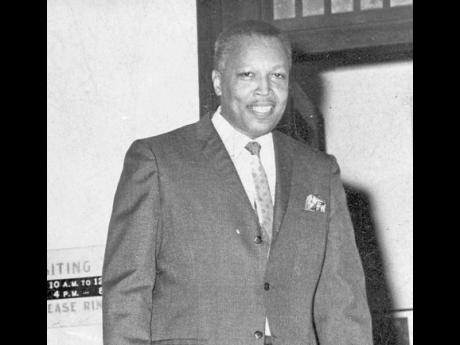 With the litany of human rights abuse allegations that international organisations have hit Jamaica with makes this story, dating all the way back to 1967, interesting. There aren’t many who, having not been around in 1967, would believe the country labelled as one of the most violent in the world, was at the forefront of championing human rights.

HUMAN RIGHTS: action at home is what matters – PM

The PRIME MINISTER and Minister of External Affairs, the Hon. Hugh Shearer, said on April 25 that the most important factor in securing human rights was the means which each country applied and adopted to make those rights effective.

It was those means which would also determine whether or not a country’s citizens enjoyed the rights that they should and whether the Universal Declaration of Human Rights became a meaningful entity in their daily lives, Mr. Shearer said.

The Prime Minister made this point as he officially opened the United Nations seminar on Human Rights at the Myrtle Bank Hotel.

He was introduced by Dr. Marc Schreiber, Head of the Human Rights Division of the U.N. and Representative of the U.N. Secretary/ General, U Thant, who presided over the opening ceremony. The ceremony was attended by the Governor General Sir Clifford Campbell.

In opening the seminar, which has been organized for the benefit of Western Hemisphere countries, the Prime Minister stated: “Ladies and gentlemen, I consider it appreciate that you have chosen as the theme of your seminar the subject, “Effective Realization of Civil and Political Rights at the National Level” at this particular time. We are becoming increasingly conscious of the fact that international measures for the promotion of Human Rights can take us only so far. In the final analysis, it is the means which each country applies and adopts at home to make these rights effective that will determine whether or not our citizens enjoy the right they should, and whether the Universal Declaration of Human Rights becomes a meaningful entity in their daily lives.

“It is fitting, too that you should have chosen this subject because we are so close to 1968, when as you all know, the United Nations and all its Member States will be celebrating the International Year for Human Rights. I must confess that I, personally am proud of such little part as I may have played in originating and promoting the proposal. Let me in passing, take the opportunity to place on record my country’s thanks and appreciation to those Member States, all champions of Human rights, which had lent their unequivocal endorsement and support to the idea of the International Year, and have played so prominent a part in the preparations which are now going forward.

“I have every confidence that the celebrations throughout the world will be memorable and a veritable milestone in the progress of social justice and in the steady upward march towards full recognition of the dignity of the individual human person.

“May I now take advantage of this occasion to share a few thoughts with you about the attitude with which we might approach the deliberations of this conference. I am confident that none of our delegations has come to this gathering intending to display the perfection of the situations at home.

“We have come to compare notes, to share experiences and to discover if anywhere, someone else has been more successful in dealing with a particular problem than we have been. We hope to discover, each of us, who has managed more effectively to disseminate amongst the people a detailed knowledge and understanding of the meaning of every civil and political right. We hope, I am sure, to profit by the experience of others and so to avoid pitfalls in which they may have fallen”.

Earlier, Mr. Shearer extended a special welcome to four “distinguished experts” in human rights from Sweden, France, Japan and Romania, who had been specially delegated by the United Nations to lead the discussions at the seminar. In referring to them he said.

“Our special guests from across the seas have an opportunity to tell us about the peculiar systems they have worked out carefully and elaborately over the years. We hope among us, to examine each peculiar institution against the background of their constitution and their legal systems, and to see how well their institutions meet their peculiar needs. We hope too, That from this close examination will come a better understanding for us all , of what are indeed the essentials of the effective guarantee of rights. We hope that from this seminar will come concrete ideas and recommendations about the essential institutions and practices which must, exist in every democratic country if the rights we progress to secure for our citizens are indeed to become a reality in practice”.

“It is our expectation that private citizens within our region, individually and in groups, will be able to use the results of our deliberations as a guide in determining the trade nature and the extent of certain rights and the measures which ought to be taken to secure them. By this means they will powerfully influence the conduct of their Governments and help to secure universal respect for the dignity of the human person”.

“Ladies and gentlemen, I trust that when our conference has ended, and you have returned to your homes, you will all feel that it was good to have been here with us”.

“May the blessing of God rest upon your deliberations”.

In his chairman’s remarks, Dr. Schreiber said the seminar was the 28th of a series which the U.N. had organized under the programme of Advisory Services in the field of human rights. While it was organized essentially for West Hemisphere countries, he was happy to see the representatives of specialized agencies of the non-Governmental Organizations and the distinguished personalities from four other continents, which would impact the living experience of institutions which had proved of special significance in safeguarding human rights.

Dr. Schreiber said, the name Kingston and of Jamaica would be durable associated with that U.N. seminar, and added; “The Secretary/General and we all in the U.N. are genuinely pleased that it should be so for the place which Jamaica has come to occupy in our organization by its contribution to the cause of human rights is an outstanding one”.

He extended condolences to the Government and people of Jamaica at the recent death of the former Prime minister, the Hon. Sir Donald Sangster, and went on to tribute to the new Prime Minister and to Jamaica’s Permanent Representative to the U.N., Mr. K. R. Richardson, who is also a member of the Jamaican delegation to the seminar.

The four human rights specialists who have been named by the U.N. to lead discussions at the seminar are Mr. Pierre Juvigny of the Consell d’Etat of France; Mr. Tsuneo Horiuchi, Director of Civil Liberties Bureau of the Ministry of Justice in Japan; Prof, Grigore Ripeanu, Procurator-General of Romania and Mr. Alfred Baxelius, the Ombudsman of Sweden.

Also taking part in the discussions will be Senior Raul Carranca Ribas, head of AMPARO, the human rights organization in Mexico.