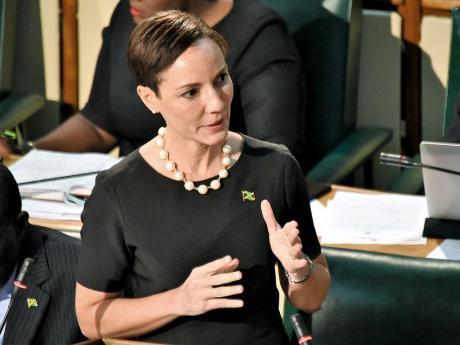 Kamina Johnson Smith's assertions that she was cyber-harassed has left a cloud over a number of parliamentarians and there is need to clear the air. Not just that, but there is also the issue of showing women who have been the victims of harassment that staying quiet is not the answer. There is also her own credibility to defend. Those issues, especially with the stench of Jamaica's poor record of violence towards women, make this week's editorial all the more important.

KAMINA JOHNSON Smith, Jamaica's foreign minister and the leader of government business in the Senate, is obliged to go further with her claim of having, in the past, been cyber-harassed by an opposition People's National Party (PNP) senator. She must name her harasser, say when it happened, and give the specific nature of the harassment.

At the same time, the police, to whom Mrs Johnson Smith said she reported the incident, must explain why they failed to proceed with the case when it would have been clear that a criminal offence had been committed, notwithstanding the minister's disinclination to press charges. We are not convinced that, if the evidence was sound, they needed her permission to proceed. Hopefully, it was not a case of the police being partial in the face of power.

There are two very compelling reasons why Mrs Johnson Smith has an obligation to go further. The first has to do with natural justice and the right of the innocent people not to have the cloud of criminal behaviour hanging over them.

Indeed, Jamaica's Senate is a small universe of 21 people. Thirteen of them are government members. The other eight sit in the opposition benches. Mrs Johnson Smith has served in the chamber since 2009. All the time – except for the period between 2012 and early 2016 when her Jamaica Labour Party (JLP) was in opposition – she has been on the government side, or in the majority. So, even taking into account some turnover of PNP members, there are few people who could have committed the alleged offence.

Further, while Mrs Johnson Smith was not gender specific in her accusation, the wide presumption is that the alleged culprit was male, further narrowing the group upon which suspicion has fallen. Persons could easily find the names of the men who have represented the PNP in the Senate since Mrs Johnson Smith entered the Upper House.

The other, and equally logical, reason for Mrs Johnson Smith to say more is the context in which the matter was raised, the ongoing debate about violence – physical, sexual and emotional – against women in Jamaica. It is a matter that has gained added attention recently in the wake of the George Wright affair – the JLP member of parliament who it is widely claimed is the man in a viral video battering a woman. Mr Wright has neither confirmed nor denied that he is the beater, but was gingerly suspended from the parliamentary caucus of his party and granted leave of absence from the House of Representatives.

The scenes represented in that video, unfortunately, are not rare or isolated in Jamaica. A 2016 survey found that nearly three in 10 (27.8 per cent) Jamaican women had suffered physical and sexual violence in their lifetime. Approximately 29 per cent said they faced emotional abuse. Women in the 25-29 age group reported the highest prevalence of violence. More than three in 10 (32.7 per cent) were victims of physical and/or sexual violence. Yet, nearly a fifth (18.4 per cent) of the women who faced such violence kept quiet about it. Most of those who said something, four in 10, told a friend. Only one in five went to the police.

SPEAK OUT AGAINST ABUSERS

This newspaper has urged women to speak out against their abusers as one way to help break the cycle of gender-based violence. If women with power, and the platform from which to speak, challenge their abusers, it empowers other women to do so. That is part of the context that frames Mrs Johnson Smith's intervention in the Senate last week, during a contentious discussion of the George Wright affair, when she spoke of “a colleague of yours on that side, who had started to send me harassing emails”. She reported the incident to the police who, Mrs Johnson Smith said, recognised that her fears were real and “justifiable”. Precisely what those fears were of, the minister did not disclose. She, however, felt sufficiently vulnerable to consider giving up running.

Under Section 9 of Jamaica's Cybercrimes Act, it is an offence for someone to use a computer/device to send to other people information “that is obscene, constitutes a threat, or is menacing in nature”, or with the intention to “harass any person, or cause harm, or the apprehension of harm, to any person or property”. Persons convicted of these offences in a parish court can, if it is a first offence, be jailed for four years or fined J$4 million. And if damage is caused as a result of the behaviour, the jail term can be increased by a year and the fine by J$1 million. If the conviction is at the Circuit Court on indictment, imprisonment for a first offence can be 10 years.

According to Mrs Johnson Smith, despite reporting the incident to the police, she decided “not to press charges” and “not to go public with either”. She, however, has now gone public – of a sort. But in a way which, while probably helpful to some women, potentially victimises most of her Senate colleagues on the opposition benches, unless the person who sent the emails that caused the minister fear admits culpability and explains her, or his, action.

In this case though, unlike with the viral video, we do not have to wait on someone's mea culpa. We already have Mrs Johnson Smith's partial disclosure. She should now go all the way by naming names and releasing the emails. The police, too, should offer verification and further and better particulars on their (in)action. The society, given the facts, would be in a position to hold the offending lawmaker to account.