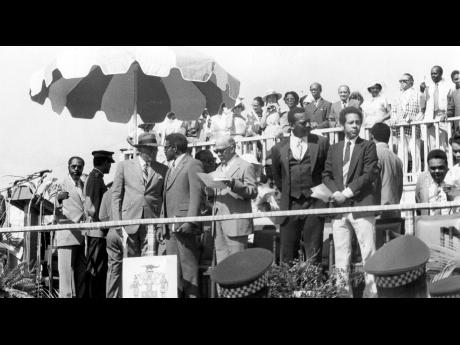 File
Dignitaries attending the formal function marking the granting of city status to Montego Bay on May 1, 1981. In the front of the line-up of leading personalities on the ceremonial stand in Sam Sharpe Square are some of those who took a leading part in the programme. Among them (from left) The Governor-General, the Most Hon. Sir Florizel Glasspole; the Minister of Local Government, the Hon. Pearnel Charles the Custos of St. James, the Hon. Donovan Henry; Mr. Carl Rhoden, M.P., and Dr. Kenneth Baugh, Minister of Health.

Montego Bay has long been the tourism Mecca of Jamaica. But that wasn't always the case. When, in 1981, the St James capital was granted city-status, everything changed. The pomp and ceremony that went with the official classification bore little resemblance to the violence and death that had taken the title away more than 100 years earlier. The Morant Bay Rebellion had the unintended consequence of returning Jamaica to Crown Colony status, under direct rule from London. With that change, went Montego Bay's city status. Regaining it, meant everything.

Montego Bay comes into its own

WITH THE BOOM OF GUNS and martial music, this North Coast town was formally proclaimed the City of Montego Bay at 11.15 a.m. on May 1.

In a festive 90-minute ceremony, the Minister of Local Government, the Hon. Pearnel Charles, read the formal proclamation according the town “the title, style, recognition privileges and status of a city”.

Thousands packed the historic Sam Sharpe Square, a-flutter with flags and bunting, brilliant in the morning sunshine, and buzzing with excitement at the re-birth of a city – which it was, before the upheaval of the Morant Bay Rebellion removed that status in 1865.

The salute to city status was led by Governor-General, the Most Hon. Sir Florizel Glasspole, who declared his pride in having given assent to the Parliamentary Act which gave city status to Montego Bay on October 9, 1980.

Sir Florizel also led the exhortations which marked the oratory of the occasion.

“Your city status creates a new dimension of both width and depth and the first necessary step for each and every one to develop a deep sense of pride for belonging to the city of Montego Bay,” Sir Florizel said.

“The new status presents a challenge to the people of Montego Bay to continue the building of their city to a higher pedestal and to strengthen the base for social and economic progress. I have no doubt about their capacity to do this for they have always shown themselves to be productive people…”

The Minister of Local Government added his quota: “It is a time of celebration, but it is also a time to sit down and plan for the future, to use your imagination and initiative to continue to build and to ensure that you live up to the great honour which has been conferred on you today. This is not the end of the struggle, it is merely the beginning…”

More pragmatic than ceremonial, Mayor Shallman Scott declared that Montego Bay could no longer be called a “Second City” to Kingston, but a city holding its own status and demanding an end to “the historical problems of centralized bureaucracy” which deprived it of key government and social agencies.

“Today, May 1”, he said, “presents a new challenge to us here in Sam Sharpe Square, in Montego Bay, in St. James, to secure some measure of economic viability and social harmony for generations to come”.

The morning ceremony, itself historical, also broke new ground with what the Governor-General described as the first public swearing-in of a Custos.

“By tradition, it is a ceremony that has always taken place at King's House, but we thought it most appropriate that we should change that practice for this one occasion”, Sir Florizel said. Moments before, he had sworn in the Hon. Kenneth Donovan Henry as the new Custos of St. James. (His installation will come later).

The new Custos sat among the dignitaries on the elevated platform on the western side of Sam Sharpe Square. Mayors from all parish capitals, Ministers and Members of Parliament, former Mayors and councilors of St. James were among the elite who took part in the celebrations.

The Third Battalion, Jamaica Regiment, provided a Guard of Honour which gave the salute and was inspected by the Governor-General at 10.12 a.m., some 12 minutes behind schedule. Thereafter, the function began with prayer from the Rt. Rev, Alfred Reid, Anglican Bishop Suffragan of Montego Bay, quoting firstly from Psalm 127: “Except the Lord build the house they labour in vain that build it. Except the Lord keep the city the watchman waketh but in vain”.

After speeches by Mayor Scott, Mr. Charles, and the Governor-General, Mr. Everald Lindo, Secretary of the St. James Parish Council, read our 38 names of former Minister of Local Government, Mayors of Montego Bay, and past Councilors who are to be presented with medals and certificates honouring their service.

The formal proclamation in the name of the Minister of Local Government was read by Mr. Charles at 11.14, as follows:

“Whereas there have been expensive developments in the fields of Trade, Industry, Commerce and Tourism in the town of Montego Bay.”

“And whereas Montego Bay has long been recognized as a second “city” of Jamaica:

“And whereas having regard to the extent to which it has become the focal point for many activities in Western Jamaica, it is deemed desirable that the town should enjoy the status and title of City:

“Now, there, by virtue of the Montego Bay (Status of City) Act, 1980 the town of Montego Bay in hereby accorded the title, style, recognition, privileges and status of a city. Proclaimed at Sam Sharpe Square this 1st day of May, 1980.”

As the reading ended, a 21-gun salute by the Jamaica Defence Force boomed across the square from the western waterfront area near the harbour.

The aircraft from the J.D.F Air Wing soared above the excited thousands in the square. Then a long and colourful procession of uniformed units and a host of school children marched to strains of martial music to close that segment of celebration. A fair at Jarrett Park in the afternoon climaxed a day of history for the City of Montego Bay and St. James.