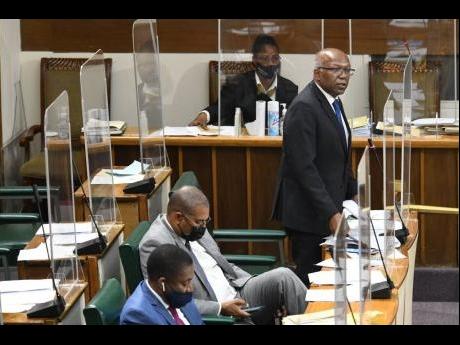 Rudolph Brown/Photographer
Dr Morais Guy on Tuesday takes charge of the seat where the scandalscarred George Wright sat last week, sparking a mini row in the House of Representatives after Wright formally became an independent member of parliament. The Opposition has insisted that they are not comfortable having Wright on their side.

The resignation of George Wright from the Jamaica Labour Party and his intention to remain in the job as a Member of Parliament has not gone smoothly and there continues to be no end in sight to that drama, even in his absence.

FIRST IT was a stool. Now George Wright’s seat in Parliament has sparked another fight.

The under-fire Westmoreland Central member of parliament who has been embroiled for two months in an assault scandal played truant from Tuesday’s sitting of the House of Representatives after snubbing critics clamouring for his resignation with a surprise return last week.

Wright’s absence triggered as much a furore as his presence might have stirred, with Dr Morais Guy seizing the seat in a turf war to spare a repeat of last week’s shock appearance when Wright plopped down beside Manchester North West Member of Parliament Mikael Phillips.

Guy’s action, done as he prepared to quiz Health Minister Dr Christopher Tufton on the Government’s refusal to sanction the drug Ivermectin for COVID19 treatment, immediately drew surprise from House Speaker Marisa Dalrymple-Philibert about the appropriateness of his action, which had not been cleared by the parliamentary authorities.

Wright and his partner Tannisha Singh had reported an April 6 squabble which coincided with a video that went viral days later. Neither Wright nor Singh cooperated with the police, thus ending an investigation amid accusations that he was the man seen battering a woman with his fists and a stool.

During the debate, everyone avoided referring to Wright by his name, but it was very clear that he was the star attraction in the drama which followed.

“Member, are you seeking permission to speak from a seat other than your own?” Dalrymple-Philibert asked.

“Madam Speaker, this is my new seat that I have been assigned,” he responded.

A tug of war followed as the Speaker tried repeatedly to restore order and have Guy comply with her request, as the utterances and mutterings from colleague parliamentarians drowned out her voice.

The Speaker was insistent that Wright, who resigned from the ruling Jamaica Labour Party after being sidelined by its parliamentary caucus, should be accommodated on the Opposition benches.

However, Leader of Opposition Business Anthony Hylton said that he had discussed the matter with Leader of Government Business Edmund Bartlett and submitted the relevant paperwork to the clerk of the Houses of Parliament prior to the start of the sitting.

As the House again descended into disorder, forcing Speaker Dalrymple-Philibert to pound her gavel, Opposition Leader Mark Golding entered the fray despite her entreaties that it was not a “contentious matter”.

“The circumstances in which a member from that side is now being asked to sit on that side is a matter that we take very seriously, ”Golding said, referring to the assault scandal.

The Speaker, however, made it clear she was in no mood to entertain him, facetiously saying that “it is contentious it is only in your mind”.

But Golding pressed further, arguing that Wright’s withdrawal from the Government might have been masked in technicality, suggesting that he would always vote with the Holness administration.

Guy eventually acquiesced to the Speaker’s demand for him to seek her permission to speak from the seat in question.